For the second year in a row, I was able to hit the FXR Ride Day in Winnipeg, Manitoba. The well-timed day of moto and camaraderie lands nicely on the Tuesday following round 4 of the Rockstar Energy MX Nationals in Regina, SK, so FXR athletes traveling the circuit and heading east can stop in and hang out with the gang.

This year it was held at FXR owner Milt Reimer‘s secret test track near his hometown of Sanford, MB. It was out in the middle of the open plains and finding the otherwise hidden track was made easy with the placement of signs pointing the way. I had my doubts as the final arrow pointed down a tractor path running alongside a canola field, but pressed on in the #dmxvan despite the sound of undercarriage meeting dirt.

Here are a bunch of photos from a great day in Manitoba:

The future of Canadian Motocross should have young Ryder McNabb’s name written all over it.

#105 Jimmy Decotis and #20 Dylan Wright put their Canada’s Motorcycle FXR Yamaha’s in sync…or was it Backstreet?

If you make a wrong turn on the track you could end up in another province before you realize!

The century-old dilapidated buildings make for cool backdrops on the Reimer property.

One of the buildings is where the family actually lived way back in the day.

RTR Performance FXR KTM rider #23 Dylan Schmoke stayed a couple extra days before heading home to San Diego for the break and ripped up the track on a borrowed 350.

Once again, I’m sure it was Milt himself who put in the most track time. And I believe this gear is from the 2016 collection.

McNabb will be on an 85cc machine this summer too.

Jamie Routley is from the area and is Jimmy’s better half.

Milt, come in and eat something!

Hopefully, we’ll see Ryan Millar back at the races in 2016 with 2 solid ACLs.

Kyle Keast and Shandell Przybilla hung out with the gang too.

If you know someone with a more natural style than Ryan Millar, send them to a national ASAP.

I remember Aaron Wiebe from the nationals a few short years ago.

Ryan could do this all day.

It was Pancake Tuesday.

Jamie’s dad washed out the front end and, of course, Kyle was the first one there to help. I just snapped photos…

They may be talking about the TLD shirt Kyle is wearing. Yes, I’m kidding.

The Millars are expecting a second in October!

The FXR riders are an affectionate bunch.

I think Andy just figured out who the fast #202 guy was.

I’m not sure why we were all so intrigued by this…so I took photos.

The Dehaans had a new addition this year too.

Check out that original FR2 gear from the turn of the century.

It’s an interesting story about how Harley Davidson tried to make them change the name from FXR.

That’s the original homestead at the back right.

I really liked this spot but took a lot of manure hits for my troubles.

Milt with some textbook style.

And with that, we all headed our separate ways. Thanks for another fun-filled afternoon of moto, food, and bench racing, Milt. See you all next June! 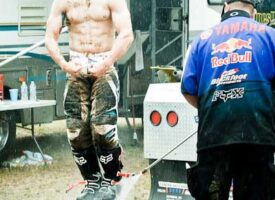 ICYMI | Catching Up with Tyler Medaglia | Presented by KTM Canada 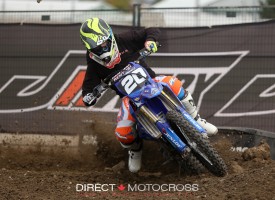