The East 250 action stopped at the famous Gillette Stadium this past weekend. It’s an open stadium, so weather was a factor. It rained lightly early on, but actually dried up later in the day. As always, the crazy East Coast continued with no riders stealing the show 2 weeks in a row. Does anybody want to step up and win this thing? Let’s take a look at the results and my thoughts.

1st Martin Davalos: This guy frustrates me. He has so much speed and so much talent and should be a multi-time Regional SX Champ by now. But for some crazy reason, Martin always seems to make bad decisions, or maybe he’s just been hit with the bad luck stick. So far this season, Martin has been able to win two races where he has looked great, but then at other races he looks like a rookie. I don’t even want to get started handing out the pieces of the blame pie for him missing Toronto due to Visa issues. Anyway, great ride by the 250 SX lifer.

2nd Jeremy Martin: Jeremy rode a great race and probably would have won with another lap or two. It’s a shame he had a DNF, as this would be 3-man race to the championship. He’s not out yet, and as we have seen so far in the East, anything can happen.

3rd Malcolm Stewart: Early on, it looked like Malcolm was in complete control. He may have gone backwards a little, but who cares. He padded his points lead to 5 over Plessinger.

4th Shane McElrath: Solid ride for Shane. I’m sure his wrist is still an issue and that is why he couldn’t hold on to the podium. He is still behind the others in fitness and seat time, but it is a pretty good ride in my books.

5th Aaron Plessinger: I hate to say it, but Aaron’s poor starts may have cost him this East title. He had one heck of a ride, but unfortunately Malcolm Stewart still finished in front of him. He needs to have a killer weekend in New York, and pray for good luck and starts in Vegas.

6th Tyler Bowers: What’s up with Tyler Bowers this season? This guy should be a podium threat every weekend. I’d really like to see him bounce back and finish the East strong.

7th Gannon Audette: The one bright spot on Mitch Payton‘s East Coast has got to be this guy. He is quietly getting it done. Please give him a ride for Outdoors. He has earned it.

8th RJ Hampshire: Probably not the result Hampshire wants, but it sure is better than sitting in a dark room concussed. He should be happy he’s out there racing and build for outdoors.

9th Anthony Rodriguez: ‘A-Rod’ needs to keep building on these solid rides and slowly start upping his speed. The speed will never be an issue, the laying on the dirt is.

10th Luke Renzland: Good ride for Renzland. He hasn’t been back from injury long, so this has got to be a confidence booster.

Biggest Stud: No real stud this week, as nobody want to insert themselves as the dominant rider for back to back weeks.

Biggest Dud: No dud for me.

Biggest Surprise: I was surprised that Stewart didn’t seal the deal. He could have given himself a nice points lead. 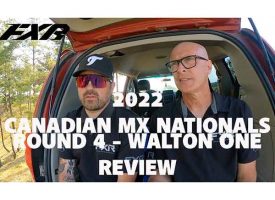