Good morning and welcome to another cup of coffee to get your week going. I just looked up the benefits of drinking coffee and it looks like, among other things, coffee may be the best source of antioxidants North Americans actually get in their diets*, so drink up!

Yep, we had a mudder. I couldn’t believe how fast Marvin Musquin was still going in the conditions. He would hold that KTM wide open and seem to just hope for the best. Well, hoping for the best is what it would amount to at mere mortal talent levels.

If you didn’t get a chance to watch live, here is the link that will let you watch all of the motos:

Don’t Do What Johnny Don’t Does

The year was…oh, never mind what year it was. Let’s just say it was at Hully Gully in Varna, Ontario, so that gives you an idea of how long ago it was. Anyway, it seemed like we had a mud race every week that summer. It was back in the day when 2-strokes ruled the world and a seized bike didn’t mean quite as much a it does these days.

It was one of those Ontario early-spring days when the humidity was hovering nicely around the 100% mark and it was over 30-degrees Celsius. My mom would always say it was ‘close’ and it always bugged me.

I remember we were out there in the second 80B moto. The track would have been passable if it actually kept raining, but it had quit a short while before the moto which started to make the track much worse. Off we went with our little wheels spinning away. For some reason, I had decided to wear one of those clear rain jackets with a zipper up the front. It was my mom who always kept my gear spic and span so I’m going to go ahead and guess it was her idea.

If you’ve ever worn one of these jackets on a warm day, you know how breathable they are and what they do. It sucks. It was late in the shortened moto and I was basically suffocating in this damn jacket. After spinning my way down the dam straightaway, I entered the whoop section and had had enough. I stopped on the top of one of them and just started peeling clothes off.

Here’s a tip for any new mud riders out there: leave your gloves on! You know how hard it is to hold onto muddy grips? Well, you can quadruple that when you have no gloves on. You can’t even turn the throttle. Bad idea #1. Next came the goggles.

If you’re reading this now and have never actually tried to race a mud race, you probably think tear-off or roll-offs solve everything. Well, they don’t. It’s actually really stressful trying to look through the small space that roll-offs leave you. It doesn’t make it look like normal. Everything is closed in and you just can’t see the way you want. There’s often a bit of moisture between the sheet of plastic and your goggle lens too that adds to this altered reality. Seriously, when your rider comes in from a mud race, hold their goggles to your face and look through them. It’s not good. So, what does any normal person do? Throw off your goggles. Bad move #2.

Sure it felt nicer as I sat there stationary in the whoops that day, but I had yet to begin moving again. My next move was to try to cool myself down further. That meant unzipping that damn jacket that was tuning me into some sort of soggy greenhouse tomato! It was a $19.99 jacket so I didn’t want to just discard it and instead simply unzipped it. Ahhhh, that felt good! Bad move #2.

Probably the dumbest thing I’d done before the race was to wear a pair of those yellow rubber rain pants over my motocross pants. You’ve done this before. They end up getting caught on your sharp foot pegs and just ripping to bits. The ripped bits then find their way into your rear sprocket and finish the job of stripping them from your body. It’s a mess. You’ve duct taped the ankles to your boots so there’s not a chance that they will come completely off, so you’re then stuck with pants dragging from your ankles waiting for the sprocket to complete its job of removing them for you. Half the time, you can’t even lift your legs to put your feet back on the pegs. Bad move #4. Just resist the urge to wear these damn things.

It was then time to make my way around the track again. Off I went slipping and sliding my way around the apple tree, out through the west end, down around and under the tunnel tower and up the hill towards the line to head out and do it again. Truthfully, I had no idea I was on the last lap. I don’t remember seeing the last-lap flag. I was just happy to make it to the trailer to get out of this gear.

It was the longest Hully Gully lap probably in the history of the infamous track. I couldn’t turn the throttle, I couldn’t see because mud was flying everywhere, my pants were mere shreds around my ankles, and my jacket was flapping around undone. I was only a 15-year-old kid but the heat and humidity was taking its toll and I collapsed into a heap back at our pit.

It wasn’t until about half an hour later that my other racer friends started coming by to talk. Every conversation started out the same way, “What the hell were you doing in the whoop section?! You were leading the race on the last lap and you stopped?!” Well, that was news to me. Not only didn’t I know it was the last lap, but now I find out I was in the lead and maybe heading for my first-every 80B win! It wasn’t to be that day. Instead of a first place trophy, all I have is this story to remind me of that day I almost won a CMA race at Hully Gully. Maybe this is the same as what makes the ending of ‘Dumb and Dumber’ so memorable. They wouldn’t get the girls and I wouldn’t get my win. Hey, if you can’t laugh at yourself…

To quote a Simpsons episode, “Don’t Do What Johnny Don’t Does.”

I’ll be working on some photos from a fun day just south of Winnipeg, Manitoba, last Tuesday. Milt Reimer, Aaron Wiebe, Andy White and the rest FXR gang invited me to stop by Milt’s private test track for their annual Ride Day. I stopped by last summer too so I knew it was a great day to hang out and watch some people ride after the final round of the western swing of Pro Nationals. Watch for some photos later here on the site.

Watch for some photos from the FXR Ride Day later here on the site.

Todd Kuli headed to Indiana for DMX to test out the 2016 line of KTM MX and Off-Road bikes a couple weeks ago. He’s sending the reports over one at a time so you can read all about his thoughts on the bikes and the experience altogether. Todd is probably one of the best story-tellers we have in Canadian moto, so I can’t wait to read what he has to say.

Watch for Todd’s report on the 2016 KTM MX and Off-Road line up here on the site. – Jeff Morgan photo

Being so busy out west with our Rockstar Energy MX Nationals, I totally missed the X Games Endurocross where we had 3 Canadians competing in the women’s final: Shelby Turner, Chantelle Bykerk, and Lexi Pechout all made the 13-rider final. If you missed it like me, here are the 2 final videos:

Have a great week, everyone. Hope that was enough to get you through another cup to get through the rest of your Monday. 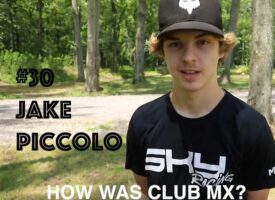 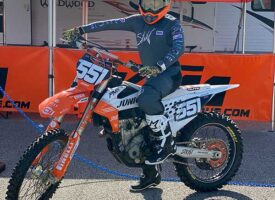 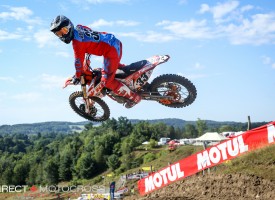 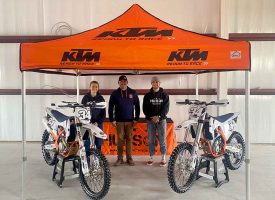