It felt great to be a the races again this past weekend. Hell, it feels great to ANYwhere these day, doesn’t it?!

The COVID-19 rules are more relaxed out here in BC than they are back at my place in Ontario. It feels great to have a little more normalcy in my life again, even if it’s only for a short time before I head back later today.

Like the Triple Crown Tour this summer, getting the Future West Moto Canadian Arenacross Championships off the ground took a lot of work. There are still strict rules around racing and gatherings all across the country.

Masks had to be worn at all times when you were in the Chilliwack Heritage Park barn and only people who had a rider on the track were allowed in the building to watch.

Without spectators and with the new rules around who can actually be on the track during races (basically, no one) it meant that we really needed to bring the racing to the homes of people across Canada and around the world.

We were able to broadcast the entire day’s qualifying and racing for all 4 rounds so far in the series. We put a headset on John Wren so we could piggyback on his in-house and over FM radio announcing, and I think it worked out very well.

Matt Koeleman from RTBA Films was the camera operator and I ran around trying to keep track of what was going on, snapped as many photos as I could, and made sure all the sponsor logos and class names were up and on the broadcast.

I think the production was well received and we’ll continue to bring all the action for the remaining two weekends of the series in November.

I wasn’t able to get to the places I would normally have been for my photos, but that’s just what we have to deal with. Having said that, my photos have not been as good as I would have liked, but I’m doing what I can in Photoshop and Lightroom to try and make them at least viewable.

I’ll do a quick “McThoughts” review of how the racing has been going. Let’s look at the top 10 points in both the Pro Am Lights and Open Pro classes:

10. 700 Codie Rouse KTM – Codie is ripping a 250 2-stroke out there and came all the way from Saskatchewan to race the first 2 rounds last week. He didn’t make it back this weekend and has fallen to 10th after two 7th place finishes.

9. 234 Zach Ufimzef KTM – Zach didn’t race the first 2 rounds in this class but decided to line up in the Pro Am this weekend. He’s an Intermediate and looks like a seasoned Pro out there. Zach is one of the more enjoyable riders to watch on these tight indoor tracks. He’s from the interior and had a very impressive 3rd place podium ride in the round 4 Main.

8. 381 Jake Piccolo KTM – Unfortunately, Jake’s results sheet sums up how things have been going for him. DNS, 1st, 11th. When he’s on two wheels he’s the fastest rider on the track. He’s heard it all before, but once he gets the mistakes sorted out, he’ll be unbeatable!

6. (Tie) 36 Parker Eales HON – Parker crashed last week and hurt his back a little. He has the speed to challenge for podiums and he hopes to be back for the final two weekends of racing.

6. (Tie) 819 Dawson Granville YAM – Dawson is another Intermediate rider out there. He’s ripping a 250 2-stroke and is learning a ton every time he’s out there on the track. He’s from Mission, BC and will put this experience to good use as he progresses.

5. 12 Luke Svensson YAM – Luke is an Intermediate rider from Langley, BC and, like Dawson, is gaining a ton of valuable experience racing these events. These guys are in some good battles behind the podium riders.

3. 482 Teren Gerber HQV – Teren is from Calgary, AB and told me he feels just a bit off the podium riders’ speed. He was always in the mix and his plan is to return to finish out the series in November.

2. 170 Julien Benek YAM – Another Intermediate rider, Julien is showing huge potential as a young up-and-comer. He reminds me of Jake Tricco on the bike and the sky is the limit for this kid. He’s just 1 point out of 1st place.

1. 77 Casey Keast HQV – This season has been the return of Casey Keast. Carlson Racing gave him a home and he is using his opportunity to the fullest. Casey is a rider who can still be champion and it will be fun to watch him over the next couple years.

9. 36 Parker Eales HON – It will be good to have Parker back on the line for the final 2 rounds after a crash last weekend took him out. He’s got the speed to podium.

8. 700 Codie Rouse KTM – The 250 2-stroke rider was a bit off the pace of the top guys but racing these events is a huge boost for any rider’s development.

7. 291 Dylan Delaplace KTM – Dylan’s bike sounded extra mean and he always gets great starts. He didn’t race Round 4 but we hope he comes back for the final 2 weekends. He’s very close to landing on the podium.

6. 381 Jake Piccolo KTM – Jake came out and won the Round 4 Pro Open Main in style. He’s an exciting rider to watch and was one of the riders clearing the middle triple on his 250. After missing the first 2 rounds, he’s likely out of the title hunt, but he’s got a couple more wins in him, for sure.

5. 482 Teren Gerber HQV – Teren’s consistency (6-5-6-6) has him about where he should be in this field. Hopefully, the weather east of here is OK in November so we see him at the final rounds.

4. 170 Julien Benek YAM – Julien proved himself in the top class at round 4 with a very impressive 2nd place. He had all the top riders hounding him, but kept his composure. He was also doing the big rhythm section triple on his 250.

3. 2 Brock Hoyer YAM – Brock’s bike also sounds mean. He’s still got the speed to go for wins and has actually only missed the podium once. Again, let’s hope the weather is good in November so he can make it down from Williams Lake, BC for the final 4 rounds.

2. 10 Keylan Meston HQV – After beating up on the Under 30 riders, Keylan seems to be a little ahead of the rest of the riders here on his big 450. Unfortunately, a couple slip ups have put blemishes on his results. He’s only 1 point out of first, but will we see him back here in November is the question.

1. 77 Casey Keast HQV – Keylan and Casey are Carlson Racing teammates and they have ridden very close out on the track in full trust of one another. Casey is from Kelowna, BC so he’ll be here for the rest of the rounds and will be tough to beat. Casey leads both classes heading into the one-week break.

OK, it’s a busy travel day for me, so have a great week and we’ll see everyone back in Chilliwack in a couple weeks. 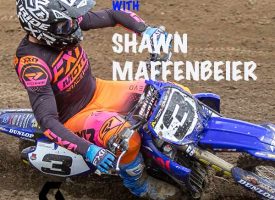 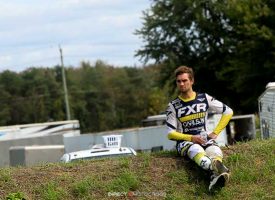 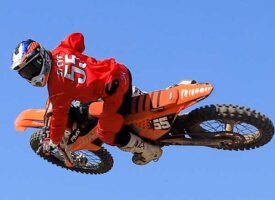