This week’s coverage is brought to you by Nihilo Concepts. Give them a click and check out all the ‘trick’ stuff they have to offer.

The Rockstar Energy MX Nationals made it’s annual stop in Ottawa, Ontario, this past weekend. Sand Del Lee in the nearby town of Richmond has played host to the series for many years and it seems to get better every year. Johnny Grant, Kevin Tyler, and the entire MX101 gang do and amazing job at getting the place ready to host an event of this size. They even had a live band!

If you watched the recap video, you know Andy White and I mentioned the weather. You can’t even imagine how humid it was! I’ve been to Tennessee in late-summer and this rivaled that insanity. Riders were slowing as the races went on and I found my camera trigger finger lagging a wee bit in the heat. I’ve even heard that some riders still aren’t feeling like themselves today, two days later! It was just that hot.

Here are a bunch of photos to re-tell the racing story from a great day.

Trophies at the Ottawa National were really cool this year. Check out these awesome Les Paul guitars they had made up for the top 3. And that’s the 45th Annual Dale Argue Cup given to the winner in both classes honoring the founder of Sand Del Lee. Nice.

The humidity Sunday was at or near 100% and that’s no joke. Riders dealt with some of the toughest race-day conditions you can imagine without the track being muddy. It was brutal and I still feel a bit ‘off’ today!

The crowd was big and enthusiastic. I even heard a live band! The lead guitarist played both the American and Canadian anthems to start the racing. Funnily, when the US anthem finished, people started their bikes. I guess we’re more used to hearing that one???

Let’s get to the racing…

You know it’s going to be a long day for the rest of the MX2 field when Royal Distributing Fox Racing KTM rider Kaven Benoit does this around the first turn!

#84 Pro Circuit Rhyno Power Yamaha rider Teagan Williams had troubles in the first, taking a DNF, then came back for a 29th in the second for 32nd.

#620 GA Checkpoint Shift Scott Yamaha’s Brad Nauditt was way back at the start of the first moto but worked up to 15th and then had troubles in the second and had to pull off for a DNF. 15-DNF for 22nd.

#213 Motorsport St. Cesaire Oakley Fox rider Tommy Dallaire was top Intermediate at Gopher Dunes and missed it by one position this week going 22-19 for 20th.

He’ll hate me for using this shot, but he went down in this corner and collected title contender Canada’s Motorcycle FXR Yamaha rider #105 Jimmy Decotis in the process.

This is why Decotis was playing catch up. He had troubles into the first turn, picked up a banner in his rear wheel, and headed out dead last.

#803 Ohlins TCD Husqvarna rider Marcus Nilsen is from Florida so he must love the perfect berms on the SDL track. He had a strong 11th in the first but was forced out early in the second after being up in the top 12 for 18th overall.

#17 Redemption Racing Fly Dragon KTM rider Seth Rarick made sure he wasn’t going to run out of gas with this over-sized tank.

Unfortunately, he crashed in the first moto, bent his sub-frame, sucked sand into the motor and DNF’d. He came back to a strong 9th in the second for 16th. He’s due for some luck…soon.

I expect we’ll see #444 Fox Drill Tech Yamaha rider Dustin Creson back up higher in the results when we leave the sandy conditions. 16-14 gave him 14th.

Conversely, watch for #29 Duroy Racing Motovan EVO rider Jeremy Pronovost to put in his best weekend of racing this coming weekend at Deschambault. 10-15 for 13th.

#34 Honda Canada TLD GDR’s Westen Wrozyna is looking good so far since joining the season in the east. Too bad he wasn’t at the western races because he looked good taking 13-11 for 12th.

#39 Vernon Motorsports Thor Yamaha’s Jess Pettis is another sophomore Pro who is getting up to speed. 14-10 put him just outside the top 10 in 11th.

#108 Monster Energy Thor Kawasaki’s Shawn Rife may have ended his Canadian adventure with 8-13 motos for 10th. He had a great start in the first but had to come from way back in the field in the second.

Rife’s teammate, #134 Cole Martinez, came back early after missing 3 rounds with a shoulder injury. His 6-12 motos put him one step ahead of Rife in 9th.

#9 Strikt Scott RMX rider Morgan Burger had a solid day. He had to come through the pack in the first and then got out to 3rd place early in the second. 9-5 gave him 8th.

Orange Motorsports Scott KTM rider #22 Liam O’Farrell was in a 3-way tie for 5th place but wound up taking 7th with 5-8 motos.

#105 Jimmy Decotis’ 12-3 gave him that 5th place spot. He had to work extremely hard in that first moto humidity. His 2nd moto 3rd was impressive.

Local hero and 2nd-year Pro rider, #20 Canada’s Motorcycle FXR Yamaha rider Dylan Wright worked his way up to 3rd in the 1st moto and then had to come back from outside the top 10 in the 2nd for 3-7 4th place.

There were great battles all over the track again this past weekend.

Honda Canada TLD GDR rider #21 Jeremy Medaglia was this close to Benoit for most of the first moto.

It was another one of the best motos of the year.

Jeremy’s second moto didn’t start out as well and he was forced to fight up from just outside the top 10 to 4th by the checkered flag. His 2-4 motos gave him 3rd spot.

The effort spent chasing top spot was pretty obvious on Jeremy at the end of the day.

#14 Rockstar OTSFF Yamaha’s Shawn Maffenbeier is finding his groove and is chasing after the 3rd spot in the championship. He was right there bhind Benoit in the second and rode his way up to a lonely 4th in the first. 4-2 gave him 2nd overall.

He’s been recovering from an injury and is now feeling better and should finish out the series strong.

Shawn is fast at the final few tracks so he should get himself in the mix every week.

There doesn’t seem to be a weakness in his game and everyone else was left chasing this view again in Ottawa.

With 4 rounds left, will anyone be able to beat this guy?

I think they ended up ‘splitting’ the jersey…

In MX1, Colton Facciotti grabbed the first moto holeshot on his Honda Canada TLD GDR 450 and gapped the rest of the field right away.

After gaining a lot of attention last week with Chloe’s pit board, #781 Zach Zagar had some electrical problems in practice but got them fixed in tie for the motos. 27-30 gave him 32nd.

Windsor rider #159 Kenzie Hennessy’s journey into the Pro ranks isn’t going as smoothly as he’d probably like. DNF-34 gave him 36th. Keep it up, Kenzie.

After going down pretty hard in the first turn pile-up in the second MX1 moto we weren’t really expecting to see any more of #58 Scotty Motosports Honda rider Graham Scott, but out he went. 20-28 gave him 26th.

This full speed ski jump before the mechanics’ area was fun to watch. #23 Freedom Cycle FXR KTM rider Dylan Schmoke wasn’t up where he normally is and finished 26-15 for 21st.

#35 Red Line Thor Yamaha rider Matthew Davenport got squirrelly in the first and bent his front end beyond rideability for a DNF. He came back in the second for a 14th and took 20th overall.

#26 Duroy Motovan KTM rider Michael Da Silva had a very strong 13th in moto 1 and then his 26th in the second dropped him to 19th overall.

Unless you were counting the bad, the Redemption Team didn’t have any luck Sunday. #761 Cade Clason was up near the front in the first moto but when some of the inside motor parts felt the need to be on the outside, his moto was over. He came back strong in the second for a 10th and 17th overall.

$36 McKee FXR Yamaha’s Hayden Halstead went for the Hard Charger Award again this week. He took 15th in the first and then went down in turn 1 of the second. He battled all the way up to 20th for 16th overall.

#978 Red Bull JMR Suzuki’s Franklin Nogueras was up in the top 10 in the first before he was forced to DNF. He came back for a strong 9th in the 2nd for 15th.

#41 Connecticut rider Matt Hammer was back in Canada and finished 17-17 for 14th.

It sounds like #160 John Dowd and his son Ryan will continue in our series. The near-half-century rider finished another impressive weekend with 9-13 motos for 10th. I happened to stumble onto the 2000 Millville National and saw Dowd battling Ricky Carmichael 15 years ago!

#24 Kyle Swanson will be on the Devil’s Lake MX Ansr Yamaha team when we hit Quebec this coming weekend. He put his tape-numbered Suzuki up in 9th with 8-12 motos.

#30 Honda Canada TLD GDR rider Kyle Keast put his off-season training to use in the heat and finished 10-8 for 8th overall.

#5 Monster Energy Thor Kawasaki rider Teddy Maier had one of the best battles with Bobby Kiniry Sunday. They went at it the entire day! his 6-7 motos gave him 7th.

Every time #3 Parts Canada Thor Husqvarna rider Tyler Medaglia looked back in the first moto, he got an eyeful of Metcalfe. They battled for nearly 30 minutes!

#149 Royal Distributing Fox racing KTM rider Cole Thompson said “This was definitely one of the toughest days of racing I’ve ever had to endure!” It was that hot, folks.

He put on an amazing how with Facciotti for 3rd place in the second MX1 moto. 5-3 gave him 4th.

After checking out in the first moto, Facciotti had his hands full early with Metcalfe in the 2nd.

The Monster Energy Thor Kawasaki rider, Metcalfe, would get around him.

Rockstar OTSFF Yamaha rider, points leader Matt Goerke, was solid in both motos. His 2-2 gave him 2nd overall and his chase-down of Metcalfe in the second was fun to watch.

These guys left everything on the track this past weekend. They’re all probably looking forward to a hard week of training compared to Sunday.

Monster Energy Thor Kawasaki’s #123 Brett Metcalfe ran out of tear offs in the first moto and you can see his finger swipes on the lens here. Everything looks much worse through goggles like that!

Metcalfe finished 3-1 for the overall, just 1 point ahead of Goerke.

It wasn’t easy though! 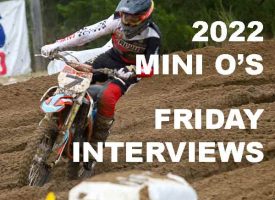 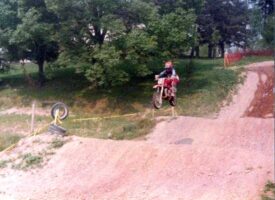