School & Grade or Occupation: Graduated 2012, now work as a waitress

My whole family has been involved with racing their entire lives, as my dad had quit riding the rest of my family continued! I would always go over to my aunty and uncle’s and ride their pit bikes and just loved the feeling I would get doing it. It has never ended since!
As a little girl, did you ever expect to be this deep into a sport like motocross?
Honestly, as a little girl I wanted to be deeper in the sport than I am now (laughs). I always wanted to be #1 in America, but then realized it takes A LOT to be at that point as well as a lot of money!

Yes and no. I think it just takes a lot of determination, and what you want to do with motocross is all in your own power! Whether you want to take it that far and make it your life or just race local races and have fun!

Ken Roczen because he’s only 21 and is living the dream that most people would die for, and he kills it! Supercross, Outdoors, it doesn’t matter what or where he’s riding, he works hard for what he’s got and it shows!

Honestly, no. Believe me, as bad as I want to say yes there just really isn’t! Women’s motocross is just so small here in Canada and the US. The girls in the US just got 3 races back after 2 years of nothing! If there was a girl that had paved the way for all us other ladies in the world then I would be pumped, as well as every other girl, but we’re just so small and nothing to the series that it sucks! The ladies that do put everything together for the Canadian Nationals I thank so much because if it weren’t for them there wouldn’t be anything in Canada! I just really wish that the Canadian series would allow the ladies that want to race the West Coast and the East Coast race them. I’ve done the whole series 3 years now and have to sit on the sidelines and watch out East because it’s not allowed!

Brittany has a lot to say about the current condition of Women’s Motocross. – Bigwave photo

Colton Facciotti. Living in Calgary now, I go into Blackfoot every day, pretty much, and the amount of #1 plates I see for Facciotti just blows my mind. I never thought he’s won the Canadian series that many times! I think someone with that many #1 plates and that much dedication to the sport for Canada is amazing! He keeps coming back and I’m sure he will continue to come back even with his new baby – it’s in his blood!

Calgary. Not just because I live here either. I’ve honestly always loved it and I’ve just been fortunate enough to always live close to it! When Calgary is groomed and watered it’s like riding on cake batter. It’s the most amazing feeling in this world. Also, the jumps are amazing. It feels like you’re flying, they’re so big, and just the whole layout of the track flows so well, it’s great!

I’m not sure if I have a hero at this point in my life. Honestly, I look up to a lot of people and that is more important to me than anything! The people that support me the most and help me get through life in the right direction are all I need!

My goals for the summer are just to do what I have worked hard for on my off season and pre-season! I always work to push harder than the year before and accomplish more than I did the year before! As well as to have a lot of fun, stay on two wheels and just get through the 3 rounds gracefully!

Brittany’s number will improve to a 3 for 2016 after a strong battle with the rest of the top women at this year’s West Nationals. – Bigwave photo

Probably getting #6 two years in a row just because I didn’t get better or worse. I made one too many mistakes last year which kept me the same as the year before! Also, getting the ‘Hard Charger Award’ a few years ago in Edmonton at Castrol Raceway. I seriously worked hard that year – my falling skills were very on point that year, but still got me my #6! Finally, this year with my family running a team it’s been interesting but the best thing I could have ever asked for. It’s always been a dream for my family to have this and now it’s all coming true! The Danyluk Racing Suzuki Team can’t wait to show up  and all kill it!

My favourite part about the races is my friends and family. It’s like a whole different world out there and no one will ever understand that or know unless you race motocross! Everyone is like one big family and everyone looks forward to the first race of the year just to see everyone again!

Yes and no. I just really think it depends how that person is. If you both take it seriously and if it’s one person’s life, then yes just because that person will also want what’s best for you and looks out for your best interest in the sport as well and wants to make you be the best you can be, and push you to your limits! If they’re just out there having fun racing the local races and doing what they do then that’s awesome too. You both can have fun and ride dirt bikes together. Either way I don’t think it really matters!

When asked if it’s important to have a racer as a boyfriend, Brittany says, “yes and no.” I think we can see here that the answer is more yes. – Bigwave photo

I can’t exactly say yes or no because I’m way too young to have babies (laughs), but if I do eventually then I’m not sure…I’m not going to force it on them. If they want to ride a dirt bike then great, I’ll try to make them the best they can be just like my parents do. And if not then that’s awesome too, I can save a lot of money then (laughs)! 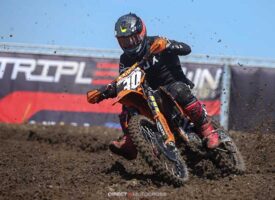