This was another full day of racing at the 45th Annual Thor Winter Olympics. We made it all the way through the heats and the consolation races. Tomorrow will be all finals. Canadians had some pretty impressive performances that had people talking. Let’s get right to it.

It was another busy day, so let’s walk straight into it and pretend we don’t see the camera…

To the surprise of no one, #329 Matthew Leblanc won his heat.

Stephan Watling waiting for the 250 B heat.

Marco Cannella gets ready to impress a bunch of people.

“What’s he doing over there? Well, me too then!” Tanner Ward went out and had a great moto too.

Tanner heads to the first turn on the inside.

Check it out! Marco and Tanner head out 1 and 2! I ran around like an over-proud mini dad.

#128 Carter Halpain must have had a really good final lap because he passed both our guys on it to take the win.

Cannella leads Ward in 250 B. They finished 2-3 but Marco was handed a 2-place penalty for jumping on a yellow. Halpain actually came over to the officials afterward and vouched for Marco but the call stood. Tanner got 2nd and Marco went to 4th.

#327 Brandon Gourlay was in heat 3 and finished 7th. I think this was actually the moto where his rear shock coil broke. Impressive ride, considering.

Our buddy John Wernsdorfer in his happy place.

Gourlay and #317 Cooper Larche blast off the line.

#47 Jo Shimoda is looking good in the B classes and took 2nd in heat 3 behind Garrett Marchbanks.

I’ve got shot from this corner from a whole bunch of years at the Mini O’s.

Cooper was 15th and had to head to the consi.

Tennant racked up another win.

Canadian #53 Bjorn Viney was 9th. Fortunately, the arm he was favouring yesterday was OK.

#122 Carson Mumford didn’t hold back in the other heat and took the win.

I hadn’t been by Tanner Ward’s pit yet, so I wandered over. They pretended they weren’t there…

#141 Eve Brodeur got some extra track time and raced the College (16-24) in the final heat race of the day.

Unfortunately, she crashed and popped her shoulder and headed back to the pits.

After chatting with the medics, that is. I went down and talked to her and she said she also popped it out earlier in the week, not while riding.

Julio Zambrano was 2nd in his College heat.

I missed young Quebec rider #8 Vincent Fortin all week. Je m’excuse. Vincent has two 16th’s and a 24th in the 65 classes.

I know this is a terrible shot of Max, but I did it on purpose. I still look at one like this of me from 1985 and I like it for some reason. Ask Max in 27 years if he still likes it…

We’ll watch for Max in the 450B final moto tomorrow.

Including this TM, there is 1 TM on the property. It won its consi.

Fortin in his consi race. He didn’t make it in this class.

#25 is Tristan Dares from Rockwood, ON. He didn’t make it through this consi in the late afternoon sunshine.

#317 Cooper Larche nailed a holeshot in his consi and held on for 3rd to move on.

Not a great photo, but still…it’s a holeshot for Cooper at the Mini O’s!

That’s Larry Fortin who came up to race in Canada a couple times this summer with the Supermini 2 consi holeshot and win.

Sorry, I didn’t see you when I went by. Can you be a little more obvious next time, please?

Thomas Rendall in his Mini Sr. consi where he had a great race and took 2nd to move on.

We got to the very end of consolation races today, so tomorrow it’s all second motos and championships!

No go get some sleep, and we’ll see you at the races… 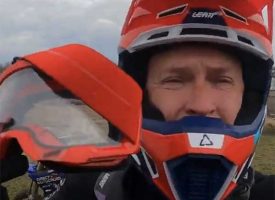 Out of the Blue: Frede Forest

On the Radar: Jake Coulter