The talent level at the RCSX keeps rising and this weekend the top amateurs were on display at Daytona International Speedway. We had a handful of Canadian riders to follow and here is a look at how they, and others, did.

The place was under construction last time I was at this race. It’s finished now and looks amazing inside the grandstand. That’s Canadian Christopher Fortier from Quebec. He had a solid day and took 2nd in the College (16-24) main.

We’re probably going to see a lot more of this in the future, but it was not easy today. #214 Austin Forkner won 250A and Open Pro Sport.

We’ll be seeing a lot more of this little fella too.

Jim Scott with his two sons, Tanner and Hunter.

Putting some finishing touches on the pack job.

#1 Kyle Fasnacht won the 2nd WMX moto and the overall.

Madi Seguin is #8 in Canada and finished 8th.

Rider Difrancesco chilling before a moto.

There was a Bell Holeshot award and winner speeches after each main.

Hanging out at the top of the Daytona bank.

I really enjoyed this late-afternoon angle, so I stayed a while. Jack Rogers took a 3rd and a 4th today.

All you have to do is keep your eye on #936 Ty Masterpool and you’re guaranteed a good action shot. He finished 2nd in Mini Sr 2 and 6th in Supermini.

#527 Jake Tricco had a really good battle with Ty in the Supermini main event.

#22 Hunter Scott in with some fast young riders.

#101 Matthew Cemovic pre-moto. He had outside gate pick and had to fight for every spot.

Keep an eye on these guys too.

When I walked by, I was sure she was speed-reading poetry.

Austin didn’t have the greatest luck in his last motos. He finished 26th in 250 B Limited and 23rd in Schoolboy 2.

#818 Davin Grose just missed making his main events. Jim Scott told me to head to the finish line for a big whip…

It was a rare checkered flag where Davin just wasn’t feeling it, I guess.

Taking a moment to focus.

I saw red numbers and thought he may be Canadian.

Jalek Swoll hanging in the infield.

Brendan Goldstein snagging a few Handicam shots for us.

MX Sports Director, Tim Cotter, welcoming everyone to the event.

Ricky Carmichael with a few words with Jason Weigant.

Then he went back to making sure people were hashtagging #rcsx.

Fortier before a moto.

Eve Brodeur powering through a corner. She hasn’t got much SX experience at all and looked pretty comfortable out there.

#65 Kaitlyn Morrow won the qualifying heat and finished 2nd in the WMX main.

#79 Jett Reynolds was unbeatable in his 85cc classes.

Catching some action after a moto.

Davey Coombs with some product placement.

Turns out he’s NOT Canadian but he was conCEIved in Canada. HAHA. That’s what he told me.

Christopher getting a little out of shape.

#812 Cameron McAdoo had a very solid day and turned some heads that weren’t already facing his direction.

This is about how close he was to Forkner all day.

Tanner Scott powering toward the wall.

What else could he do?!

Eve finished 7th in the heat.

Anyone care to insert a Magnum PI reference here?

Kylie making her way forward in the heat.

Gagne plans on racing our Eastern Women’s Nationals this summer.

Eve was running 6th in the main and then troubles had her in the pits for repairs.

Matthew making the best of a bad situation.

I think the only thing to do from way out there is slow down and shoot for the inside.

#2 Hunter Scott ready for a main.

Cokinos is getting to be a very tall little bike rider.

#70 John Grewe pressured Byrne in one of their mains.

The Grewe/Barry Carsten battles are legendary, and today was no different.

Whiskey Throttle was going around some of the older age group races.

They actually used the Jaws of Life to cut this swingarm and get the rider’s leg out from between the wheel.

The inside gates had a berm to navigate late in the day.

A not so ‘rad’ moment for Radmx.com.

#527 Jake Tricco heading out for the Supermini main.

Tricco in the corner before the Pro finish line from Saturday, if ya know where I mean.

#424 Austin Watling in his final main.

Austin wound up in 26th.

The camera loves those colours!

Jalek Swoll won the final moto of the weekend, Schoolboy 1, and threw down a classic NASCAR celebration.

And that was it for the 2016 RCSX at Daytona International Speedway. Great event. See you next year… 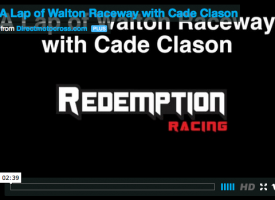 A Lap of Walton Raceway with Cade Clason