Going into the break between the end of the western swing of the Rockstar Energy Drink MX Nationals and the eastern swing, I always think I’m going to enjoy the two weekends off. Well, it happened again this year that I ended up going to RedBud to check out the Lucas Oil AMA Outdoor Championship instead of sleeping in and maybe going to the beach. Since I decided to go at the last minute, I didn’t feel much pressure. Here’s a look at some of the action both on and off the track in Buchanan, Michigan this past Saturday.

In case you want to know how you could have done better LAST week. LOL

MXPTV.com’s Matt Wozney is even busier at the races these days. He’s the guy in charge of the pre-show production and more.

We bumped into Michigan’s Joey Crown. Although he broke his collarbone in the process, he still managed to make it into Loretta Lynn’s. He also plans on racing the Parts Canada TransCan too. Sorry, everyone in the Intermediate classes…

“Sorry, baby. It doesn’t always go like you see on TV!”

Our friend from the Future West AX Series, Noah McConahy, was racing the 450 class.

It was interesting listening to Kyle Chisholm talk about the struggles a rider who even has a career number in the USA has just paying the bills. Look him up if you want to help a guy out down south.

I like to hang around the mechanics’ area during practice to see the adjustments etc.

Mitchell Oldenburg from Oak Hill is showing good speed in the 250 class.

It WAS the 4th of July after all.

#881 Jerry Lorenz made it into the 450 motos through the consolation race where the top 4 make it in. 37th overall.

It’s amazing the speed of the riders who DON’T make it in. #165 James Roberts was close but not close enough. He DID clear Larocco’s Leap for the first time though.

There was one Canadian racing RedBud. John John Pauk is still taking a run at the series. He was forced to race the consi but a bad start left him too far behind to make it in.

#180 Bryar Perry raced our series a couple years ago. He didn’t make the motos either.

#655 John John blasting off for the consolation race.

You always have to have one eye on the track and another in the crowd. We need to hire a chameleon as a photographer! (Google it, Bowker!)

Is Jordan Smith sticking his tongue out at me?! And to think I was going to talk about how impressed I was with his efforts after a terrible start.

Anyone care to caption this one?

Riders lined up for the national anthem on a pretty special day in the USA.

#16 Zach Osborne got out to great starts and battled at the front all day.

“Hey, Steve. Are you almost ready to go?” “Hang on. I can’t find my third plastic flamingo. There it is!”

I remember Hully Gully sold me what were rumoured to be the first pair of Oakley Factory Pilots (that’s what I called them?) in all of Canada. Did Chuck lie to me to close the deal? By the way, it’s pretty funny that he threw these old glasses on for Sunday, but his hair was like that yesterday and is like that again today.

Hey, he looks pretty comfortable and his view isn’t blocked by sitting down. He’s a genius!

Webb was pretty bummed after the first moto. He said on the stage that he had a clutch go away on him.

It was hot but not as hot as we’ve seen at RedBud. Here’s Jeremy Martin cooling off after a first moto win.

Huge thanks to Brandon Short from MX Sports for looking after us on such short notice.

You know exactly what Zach is yelling here.

If I didn’t know better, I’d say that was our own Donk catching a lift with the Husky gang.

And that’s exactly how they’d finish on the day.

These guys wouldn’t stop until I snapped a few photos. Come to think of it, someone did a funnel every time I did. I’m guessing there were some Sunday headaches.

This was my favourite spot to shoot Sunday. #51 Justin Barcia took an extremely hard-fought overall Sunday.

#5 Ryan Dungey was a very close second after they split moto wins.

Defending champ #1 Ken Roczen looked like he was out of it at the start but worked hard to chase the lead 2.

#46 Phil Nicoletti jumped out to great starts and finished 12th.

Speaking of 10, Justin Brayton edged him out for 9th.

These two kept the crowd in a frenzy by staying this close all day.

They all got their money’s worth this past weekend. Both classes and all 4 motos were amazing!

#39 Fredrik Noren from Sweden had a solid day for 7th and got married over the weekend.

#4 Blake Baggett just couldn’t quite get himself in the battle at the front and finished 6-9 for 8th.

It’s a little tougher to be a 2-stroke rider as they have to ride a 250 in the 450 class. Cody Gragg finished 38th but got a lot of cheers from the older dudes in the crowd.

Someone tell us all what these tattoos mean, please.

Dungey getting some TV face time.

I’m no lip reader, but I think it was something like, “WOOOOOOO!”

This guy just keeps getting in my way! Actually, I just stand over Simon Cudby’s shoulder because people are always posing for his camera and then it looks like it was for me.

FOCUS!!! See, even these guys get pre-race jitters.

Is that expensive, Austin?

Christian Craig scrubbing a little off the ski jump.

Aaron Plessinger was consistent with 9-9 motos for 7th.

Scrub it or jump it? I know what looks way cooler!

Actually, the scrub option is OK too, as #28 Jessy Nelson demonstrates for 9th place.

Some went with full-on sand tires while others didn’t.

Checking out the live timing and the live video feed behind the podium.

That’s what Johnny ‘O Show’ O’Mara looks like now…and that’s what he looked like in the early 80’s on his shirt. LOL

I don’t think anyone was happier than Christian Craig getting his holeshot cheque.

Yep, they did another funnel.

Then decides to get a little closer.

Zach went out and sprayed the crowd too.

Jeremy gets right up close and personal.

You really shouldn’t waste ALL the champagne.

I told you I’d use this one, Ken Essex!

I saw them posing so I took the shot. Should I recognize either of them?

Aldon Baker looks on as Roger DeCoster uses an old Jedi mind trick on Dungey. He’ll go 1-1 at the next race now.

The crowd appreciated his “RED BUUUDDD!”

The crowd got into a chant of, “Let Bubba ride!” at one point.

You know things are getting crazy when someone who’s been to as many races as Jeremy Albrecht has to shoot a quick video.

A refreshing bag of rags on ice.

Coy Gibbs was there for his team’s win.

Will Joey line up in MX2 on Pro day at Walton. Methinks yes.

Here are a few more shots….

Anderson quietly got this close to Roczen.

They kept the track in perfect condition all day. It got nice and rough but there was no dust anywhere. How’d they do that?!

Like I said, one eye on the crowd at all times.

I kept an eye on Jordan Smith as he charged up through the field. He was way back but never gave up.

Apparently, that’s Clam the Gnome and he’s been making the rounds.

Nicoletti with some body English.

Noah has a Supercross ride with the same BWR K1 Speed team for 2016 but says he’d still like to hit the AX series in Canada.

This is what happens when you take the main line with a top 3 rider behind you.

Jake Loberg was at RedBud and finished 28th. I tried to talk him into racing Gopher Dunes this weekend. He didn’t say no…

You had to go to the fences if you hoped for a smooth line that wasn’t there.

Thanks for looking and sometimes even reading the captions. See you at the races… 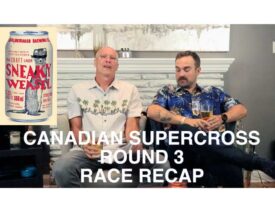 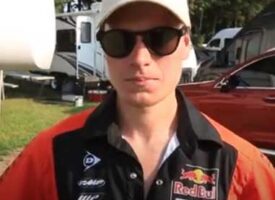 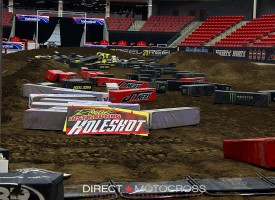