We made our second of two stops in Quebec this past weekend at the rough sand track just west of Quebec City, on the north side of the St. Lawrence River in Deschambault. Most riders you spoke to on Saturday named it as one of their favourite tracks on the circuit. Unfortunately, the track came to life and bit a few of the riders this year, leaving some questionable for this week’s final round at RJ’s in Barrie, Ontario. Here’s a closer look at some of the racing action from a warm day at Deschambault MX.

Ohio rider #471 Logan Karnow made the switch to his Honda 250F for this week. Unfortunately, the switch wouldn’t keep him off the ground and he fell 3 times in moto 1 and then had a sub-frame bolt come loose in the second. 27-DNF put him way back in 38th. He’ll be looking for some much better results this week.

#69 Ryeley Gallup was feeling great in the morning, and was the first MX2 rider to jump the huge 130′ table double on lap 3 in practice. Unfortunately, he hyper-extended his clutch hand in a different area of the track. He used a provisional to get into the motos but was just unable to hang on and called it a day.

#79 Tommy Dallaire was back in action after his hip dislocation suffered at Pleasant Valley just two weeks before. He wasn’t up where he wanted to be but at least he was on the track. 37-31 for 33rd.

#71 McCoy Brough from Utah actually competed at Loretta Lynn’s during the week and still made it to Deschambault to race on Sunday! 32-22 put him 25th.

Top Intermediate rider was #327 Brandon Gourlay…but it shouldn’t have been! Brandon hit the kicker in the triple step up and landed hard on his head in the second moto. His 17th in the first was enough to give him 23rd overall. Hope you’re feeling better today, Brandon. His quote when I got to him on the ground: “I’m OK…it’s just a concussion.”

Can you say you led a Pro National? #47 Dylan Delaplace can! He made a sweet inside pass for the lead in the second corner of the first moto and led the race for a short time. 17-26 gave him 21st.

An off weekend for Mark Worth, to say the least. He started the first moto in last place and worked hard to finish 11th. He also crashed hard in the second and took a DNF 39th. 17th overall is his overall.

#35 Hayden Halstead was another rider who fell victim to crashes. He still managed to salvage 12th overall with 12-13 motos.

I have to admit, I knew nothing about #640 Aaron Zielfelder before Sunday. The New Hampshire rider was impressive with 10-12 motos for 11th overall.

#18 Brad Nauditt struggled with bike set up at round 9. He found a kicker in an inside line up the face of a jump and crashed hard. He got up and finished 14-6 for 10th.

Yes, he did it again! #36 Davey Fraser pulled the first moto Royal Distributing Holeshot and went with his trademark fist pump over this jump while out front. He finished 6-11 for 8th.

#34 Westen Wrozyna knows he belongs up near the front, and he’s getting closer. He crashed hard in the second and tweaked his knee but still managed 7-10 motos for 7th.

I don’t know much about #351 Eric Grondahl either, but the New Hampshire rider had a very solid day finishing 8-7 for 6th overall.

#20 Jess Pettis ended up riding on his own a lot this past Sunday. He had a solid day, finishing 5th (5-4), but he wants to fight for podiums and wins.

#15 Shawn Maffenbeier was fast but finished just off the podium in 4th (3-5). He got together with Dylan Wright in the first but said on stage, “It got a little rough, and Dylan’s not going to like it, but he’d give it right back!”

#164 Dakota Alix won the crowd over when he spoke two French words on the podium and said, “I think that’s French.” His close battle with Maffenbeier and Wright late in the first was a great one. 2-3 put him 3rd.

A motivated Dylan Wright is a scary thing!

He wasn’t happy with his 4th in the 1st moto and came out to win the second. He caught and passed Cole Thompson in the second and was thrilled to take the moto win. 4-1 gave him 2nd.

#4 Cole Thompson knew what he had to do and went out and did it. His 1-2 gave him the overall and clinched the MX2 title for him. He wasn’t happy to get caught and passed, but I’m sure it has sunk in and has turned that frown upside-down today.

It’s rare to see #800 Mike Alessi this early in a photo report but Sunday was not his day. He qualified fastest but then had a bike issue in the first moto that had him limping it around the track for 33rd. He crashed hard down the new hill section and ended up in the ditch and took a DNF for 40th.

#68 Taylor Ciampichini finished 20-22 for 24th overall. Thanks for the prime parking spot on Saturday, Taylor!

#45 Brock Leitner managed to brake his sub-frame on the huge tabletop jump in the first moto and took a 36th. He came back in the second and had a solid 14th for 20th overall.

#27 Shawn Robinson should have had a great day in Deschambault. He took 12th in the first moto but then had a big crash while running 7th in moto 2 and had to go for some stitches in his knee. 12-DNF gave him 19th.

#185 Max Tannenbaum had bike issues in the first moto and then came back for 11th in the second for 18th overall.

#33 Eric Jeffery looked good in his new Fly gear and finished a consistent 17-17 for 16th overall.

#3 Brett Metcalfe finished up in 3rd place in moto 1. Unfortunately, he got bit by a kicker in the 2nd and headed off to the hospital to get checked out. It sounds like he hit his face pretty hard and is getting his arm checked out. We’ll give you an official injury update when we know more for sure. 3-DNF gave him 13th.

#78 Michael Fowler was hellbent on doing the table jump every lap, no matter what. He’s starting to put in some very good results and took 12th with 13-13 motos.

#28 Keylan Meston was in a great 2nd moto battle with Kyle Swanson, Morgan Burger, and Riley Brough. He finished 9th (10-10).

#21 Kyle Swanson was up with the top riders in the first but said he started thinking about the money and settled in. His 8-7 motos gave him 7th…and enough money to make it back to Motopark for the week.

#5 Tyler Medaglia finished 6th in the first moto. He came from dead last in the second to challenge for 5th on the final lap. He then took what was one of the biggest falls he’s ever taken. He ejected on the big quad and got his feet caught on the bars and went down in a heap. He somehow got back on his bike without losing a place! 6-6 gave him 6th.

#57 Tim Tremblay had a very good day and finished 7-5 for 5th overall.

#6 Cade Clason tied his best-ever overall with a 4th (5-4). He had Medaglia all over him late in the second but hung on until Tyler went down.

#1 Matt Goerke had come from way back in the first moto, again. He made it back to 4th by the flag. In the 2nd, he made it up to 2nd and was trying to run down Kaven Benoit but said said Kaven was able to pick the pace up again. 4-2 gave him 3rd.

#118 Davi Millsaps took off in the first with Benoit on his rear fender the entire moto. He came back in the second and took 3rd. He was sincerely happy for his teammate on Sunday and showed a lot of class congratulating him on the stage. 1-3 gave him 2nd overall.

The day belonged to #11 Kaven Benoit who took his first MX1 win and overall in his rookie year. 2-1 gave him the overall in front of an elated Quebec crowd.

OK, I’ve got to get to the video coverage now. We’ll put together one featuring Kaven Benoit and his first-ever MX1 win, too. Thanks for reading.

Also, #727 Dave Blanchet took a hard fall Saturday late in the day. He was taken to hospital where it was determined his jaw was broken in 3 places, he punctured a lung, fractured his scapula, and cracked 4 vertebra. Get well soon, Dave.

Check out these new Scott Prospect goggles! We’ll SEE you at the races… 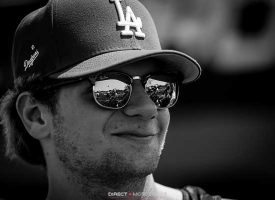 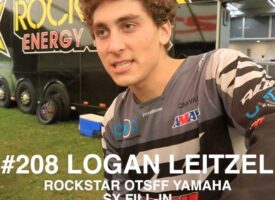 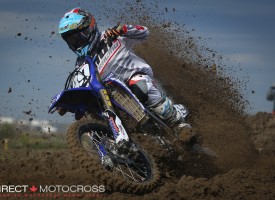