Singletracks: Catching Up With… Brian Wojanrowski

Every man has his challenges and tests in life that they work to overcome. It can be something as simple as making it to work on time, getting that school project done or winning a marathon. For Brian “Wojo Wojnarowski it was winning the Corduroy Enduro. After many attempts and 2nd place finishes, Brian finally brought the trophy back his home town of Ponty Pool, Ontario this week. We caught up with the off road specialist to get his thoughts on his 2013 season.

Congratulations on winning the cord Brian. Take us through the weekend and what your thoughts were going into it. Give us a recap of how it all went.

I have practiced up in that area a fair bit this summer. Practicing up in the rocks up there is pretty technical. Friday was pretty nice. It was really good conditions. I had a really good day on Friday, I didn’t have any trouble. By the end of Friday I had a decent lead and then on Friday night it just poured all night and then rained all day Saturday. It changed things a lot on Saturday because a little bit of luck was definitely involved. There were areas of the track where you could lose minutes of time if you got hung up. The water in some spots was so deep that you were fortunate to get through without any major problems on the Saturday. On the Sunday we had to trailer up. I forgot to mention that there was a bit of an issue with the cops. They wouldn’t allow us to ride on the road, so we had to run in a shortened loop on Saturday and then Sunday we had to trailer up to Kinmount and we ran a couple of loops of 30 or 40 km trail tests. On Sunday it was really muddy and I luckily didn’t get stuck in any mud holes. It was just one of those weekends everything went good for me and I ended up winning it.

Brian always has a great attitude and a never give up work ethic.

What does it feel like finally winning it? I know you have tried the last few years and you have always finished a close second or close to it and there have always been some big names showing up for this race. How does it feel to take home that log?

It’s always nice to win. I was pretty happy with the ride I put in last year. I ended up getting second place and I rode well. Chris Burks was the one who beat me last year but I thought that I rode really well last year too. If somebody shows up who is better then you, you just have to put in a good effort and try your best. The year before that Bobby Prachneau came out and I crashed pretty bad in the first or second test and banged my thumb up a bit so I didn’t get to ride to good because I was pretty banged up. It really wasn’t much of a race at all. This year I didn’t have any injuries or any problems during the race and everything worked out. It’s great to finally win it. I hope I can do it again next year.

You have been at this sport along time, you have established yourself as one of the top names. How was the rest of the year at the WEC, the Off-road Ontario stuff? What is your overall outlook on the Off-road stuff in Canada in general?

Overall I think there is a couple of challenges that we have on a provincial level and also at the national level. In the provincial level there are a couple of different series. I race both of the series along with all the guys and everyone involved in both series are great guys. There are two different groups and I don’t know all of the ins and outs of the politics involved but sometimes I think it would be a little bit better if the two groups would get together and just have one series with good tracks, the tracks marked well and good logistics. I think maybe if it was like this, it would get better turn outs. I don’t know for sure I am just speculating. I think it is the same with the motocross stuff sometimes it seems like there is five races every weekend in just south western Ontario. The turn outs might be better if there wasn’t five races that close to Toronto because then none of the races get good turn outs. On the national level this year the WEC changed it to an Eastern championship and a Western championship and I think the reason that was done is because this country is so big and it is really tough to have a national series, whether it is super bike racing, motocross or cars it is pretty expensive to go from one end of the country to the other. Especially with the off-road stuff, everyone has jobs and families. It’s really hard to pack up and go across the country for a long period of time and expect to get good turn outs. I don’t really know what the answer is. I know in the United States they don’t even have a true national off-road series, they have GNCC in the east and the WORC’s stuff in the west and maybe that is partially because it is such a huge commitment to go from coast to coast. This year I got to participate in the Eastern series. I didn’t get a chance to do the west. The Eastern series went ok. At Gopher Dunes I did about as good as I could have done. Nathan Bles and Josh Long beat me pretty good there. They are both really good in that terrain. I wasn’t very surprised about that. At Walton I did pretty well. It was pretty muddy on the Saturday. I ended up first on the Saturday. I went 2-2 in two motos and I ended up first overall. On the Sunday I had a good start. I was in second behind Nathan and I had a weird problem a stick popped up and knocked the carburetor out of the reed block. By the time I got back to the pits and put the carburettor close enough to the reed block to get it started I was so far back that there was no way I was going to catch the leader, so I didn’t really get a chance to race with Nathan on the Sunday but I ended up third on Sunday and second overall in that series. Nathan is a really fast rider and hopefully he comes out and does some more of the races. But in general the Ontario stuff is going pretty good. We have a couple more races and then we are done for the year.

Tell us about your program, you have a great program going on with Machine Racing, John Nelson and Yamaha Canada. Tell us how that is going and how much you obviously appreciate the support and your thoughts on the brand.

I have ridden with those guys for a long time. I have been pretty fortunate that I have had a chance to ride a 450 and a 250 two stroke but I mostly ride the 250 two stroke. I know those bikes pretty good and so do they. We have worked together for so long now that they know what I am looking for in the handling and we communicate a lot better now as far as trying to get the bike set up for how I like it. A lot of the things we are using over and over again like settings; we have used them so much in the past that we all know what to do quickly. My bike is good, it handles pretty good and has lots of power. It’s really simple and very reliable which is really important with this kind of racing. For me I can’t ask for any more with the bike and how it all works for me. There are different thoughts on big bikes, little bikes, two strokes, four stokes whatever but for me my YZ250 seems to be the best bike for me.

With John, he has different connections and lots of experience. When you have a guy like him in your corner, it really helps a lot with getting stuff done. With the guys at Yamaha they are really good to me. I have ridden for them for a long time now and they really want to see me do good and the best I can and it is always nice to have a company like that behind me. All the Yamaha guys are enthusiasts and I don’t have much experience with the other brands so I’m not saying that the guys there aren’t enthusiasts but the guys at Yamaha will send me emails congratulating me and that is really nice. Small things like that go a long way.

Wojo spends as much time off the bike as he does on it to prepare for the season.

Tell us a little bit about your training. How much time do you spend training on and off the bike? Do you do any workouts, cycling or anything else like that?

I have worked with Todd at PerformX for 5 years now and he has a really good program for me. It seems to keep building each year. It changes from where you are in the year. In the winter there is a lot more weights and a lot more reps. It all changes throughout the year. I definitely work hard off of the bike. I’m in pretty good shape I have been for a few years and I keep trying to improve each year with my strength and cardio. That all has a lot to do with results especially when you get older. I ride all year long in the winter. I stud my tires. I also mountain bike so I am practicing all the time. I’m always pretty busy training.

Thank you Brian for taking the time to talk with us and let our readers know what’s going on with you. Is there anybody you would like to thank?

I would like to thank Yamaha, Machine Racing, LGS, AME grips, AXO, Ortho-flex, Podium Grafix, PerformX, Rekluse and Atlas Brace. I would also like to thank Brian Ward for letting me do Tuesday night moto’s at his place and going mountain biking with me on Wednesday nights, my dad for constantly straightening pipes when I smash them and helping me out at the races and also my wife for all her help and support. 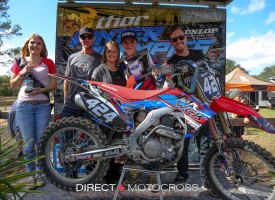