One of the coolest things about Pro sports is the route athletes take to get there. Everyone has their own story, but the goal is always the same. When a rider makes the move from Amateur to Pro, it usually comes with a lot of ups and downs as they get acclimated to the increased pace and longer motos. Quebec rider, Guillaume St. Cyr, is one of the usually large crop of fast French riders who makes the move to Pro each year. His best finish last summer was a 21st overall at the first round of the Eastern swing at Gopher Dunes. He will be a full-time Pro in 2016 so we caught up to him to get his thoughts on the transition.

Guillaume St. Cyr will be a full-time Pro rider in 2016. ~ Bigwave photo

For the people who don’t know you, can tell us a little about yourself?
I’m an 18-year-old French guy from Victoriaville, QC. Like you have probably seen, I have my own style and like to have long hair!

Guillaume raced the Ulverton National in 2014, but got off to a rough start when a bunch of riders fell in the first turn in front of him. ~ Bigwave photo

How did you get started riding and racing?
When I was 5 years old, my little cousin, William Moreau, got a PW Yamaha, and when I found out, I told my dad that, “I want one too.” So, at that time, I was playing hockey and my dad told me, “you have to chose between motocross or hockey.”  I said, “motocross!” right after his question. So, after that, he bought me a PW and I started to ride in my backyard and doing jumps. I totally fell in love with it, and the year after he bought me a KTM 50cc. Then he brought me to a race at St-Julie and I won the race. That was my first race ever and since then I have been racing.

When I first saw you at the 2015 Gopher Dunes Pro National, you kind of reminded me of a young Jeremy Medaglia with the long hair and FXR gear. Is there a certain Pro rider that you look up to and try to emulate?
One of the riders that I look up to is Josh Hansen because I really like his style with his long hair and how he’s smooth on a bike. I especially love to throw WHIPS and Hanny is the best to do that, so that’s another thing that I like about him.

In 2015, you competed as an Intermediate in the Pro class during  the Eastern swing of the CMRC Rockstar Energy Nationals and earned national number 76. What were you able to learn from those races?
I learned to be more aggressive on the track because nobody is letting you pass by. I also learned that I have to work harder off the track if I want to be faster on the track.

What have you been doing to prepare yourself for the 2016 season?
Since the season of races is over, I have been training in a Crossfit gym every morning from Monday through Friday and I am going to Jimmy Weinert Training Facility for 3 months.

He will spend 3 months getting ready down at JWTF. ~ Bigwave photo

What are your goals for this upcoming season?
My goals for the upcoming season are to finish in top 20 every round of the east coast. I want to do top 15 in the East, and finish top 30 in the MX2 championship and to get a better number than 76.

Thank you for the chat and best of luck to you in 2016. Who would you like to thank?
Thanks! Yes, I would like to thank JPSsport, Yamaha Canada, 6D, 100%, FXR, Deft Family, Forma Boots, JWTF, Hypertech, Dynamics Suspension, LTSc clothing, Vic Roulant and my family. 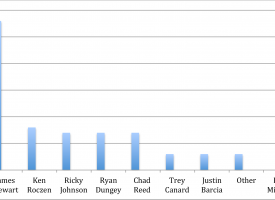 Poll Results: Who Will Win the 2015 Monster Energy Cup? 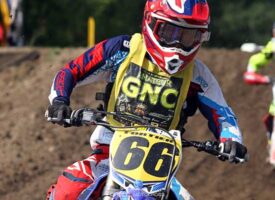