Newtonville, Ontario, rider, Westen Wrozyna, has had the eyes of the Canadian motocross nndustry fixed on him since he was a very young amateur rider. He moved up through the ranks and turned Pro the same year that saw Dylan Wright and Jess Pettis do the same. After a couple years with support from the GDR Honda Team, Westen will now make the move to Kawasaki’s for 2016 that will see him racing in some different locations with new opportunities. We grabbed the always gracious rider for a quick chat to see what his thoughts are on the new deal.

Ontario rider Westen Wrozyna has made the switch to Kawasaki for 2016. We caught up with him to get his thoughts on the change and the upcoming season. ~ Bigwave photo

What are you up to today?
Today, I worked with my brother Cam (Wrozyna) and Travis Ford. We worked on some sections and did some motos.

“This year, I had to look for something new, and so we were able to put a deal together to ride Kawasaki. Two Wheel has done a great job prepping the bike, and I feel really comfortable on it. It’s a great bike.” ~ Bigwave photo

You have been on Honda’s since you first got on 85’s. How was the first ride on the new machine?
I’ve been with Honda for a very long time. I am very grateful for all the opportunities Honda Canada has given me. This year, I had to look for something new, and so we were able to put a deal together to ride Kawasaki. Two Wheel has done a great job prepping the bike, and I feel really comfortable on it. It’s a great bike.

Going into 2015, you were slated to ride the entire 10-race National series for the GDR Honda Team, and then last-minute plans changed and you only lined up for the East Coast rounds. What happened?
The team didn’t think I was ready for the West Coast rounds, so I stayed home and started my season at Gopher Dunes.

What races will you be doing, and what are your plans and goals going into this season?
The plan is to do a lot of racing. I would like to do some US Pro Am races and East Coast Canadian Nationals.

For 2016, you are once again sporting the number 34 for the CMRC Rockstar Energy Nationals. What is it going to take to lower that number?
Getting a better number is always the goal, but I’m not concerned with that this year. This year, I need to become a better rider and that’s my number one goal.

Westen will head in a new direction for 2016. Good luck with everything, Westen. ~ Bigwave photo

Well, thanks for your time, Westen, who would you like to thank?
I’d like to thank The Farm Racing, Two wheel Motorsport, Von Zipper, Atlas Brace, Hinson clutches, Impala bicycles and CLMX. 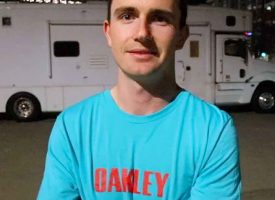