There definitely increased interest in the Slaton Racing team for 250 West Supercross this season. The KTM team is home for Canadian #127 Cole Thompson and #203 Zac Commans who is wearing Canadian FXR Racing gear. Canadian Chris Elliott sat down with one of the title sponsors’ main men, Nuclear Blast Records GM Gerardo Martinez to get his thoughts on their involvement. Here is what he had to say.

It’s nice to chat with you, Gerardo. We have been intrigued with the Nuclear Blast/Slaton Racing relationship since it was announced…how did your holidays go?

Thank you! Yes, I think this came out of left field for some that know about our company, but in reality this is something I’ve been trying to do for some time. Holidays were good, I had a little time off, but now we are in full race mode!

Let’s get a little back-story on you and your title at the record label as well as a little insight to your moto involvement in the past.

Well, I’ve been working for the company for 13 plus years. We are a record label that specializes in hard-hitting Heavy Metal/Hard Rock music (Slayer, Meshuggah, Machine Head, Exodus, Testament, Suicide Silence, etc). Moto is in my blood – my dad used to race motocross back in the 70s and early 80s. I have followed the sport religiously since I could remember. I have always seen the potential connection with both of our scenes and I’m here to make sure that connection happens. This is not the first time for our involvement, a few years ago I had the opportunity to meet Ryan Clark through a great friend of mine (Raymond Herrera, former drummer of the metal band Fear Factory). We became friends and I started helping his team (Team Solitaire) with promotional tools like posters, online videos etc..

So getting into 2016, how did this relationship come together with Slaton Racing and its partners?

Ryan Clark phoned me out of the blue a couple of months ago, I believe, and told me about the plans. I immediately felt the need to get back to the sport I love so much and also knowing that the music industry lacks that strong link to the motorcycle racing scene. I jumped at the opportunity right away! The label takes pride in doing lots of things outside the box and believes these are the things that can help both industries prosper. No one is coming here dumping millions of dollars left and right anymore so you have to be creative on how you hook up with sponsorships – other companies that could help your brand out there and still make sure you get your money’s worth.

In my opinion, one of the reasons why moto doesn’t get the “respect” NASCAR gets is because there still isn’t enough outside the box sponsorship with teams. It’s all about knowing how to link other industries that have nothing to do with motorcycles and be able to make it work. I feel the connection with hard-hitting music and moto has always been there, but maybe not in this specific style of music. We are here to try new things and looking at this long term. The team has two awesome young riders and a good set up to do well in 2016.

“In my opinion, one of the reasons why moto doesn’t get the “respect” NASCAR gets is because there still isn’t enough outside the box sponsorship with teams. It’s all about knowing how to link other industries that have nothing to do with motorcycles and be able to make it work.” – Bigwave photo

Being a part of the music industry and a major moto enthusiast for years, did you pay close attention to MotoXXX and its close ties with music when the team was in operation years back?

Absolutely. I actually talk to Jordan from time to time as I’m also friends with his Strung Out band-mate Chris. They’re fans of some of our bands and have met them at shows in the past. I think Jordan and Moto XXX opened the doors for music and moto. Unfortunately, I think some people weren’t ready as it seems they’ve always seen Punk, Metal, or Hard Rock as some sort of music to stay away from! Then again, all you hear when the gate is about to drop or even on some of the opening ceremonies is hard-hitting music, be it Metal, Punk, or Hard Rock…so it’s just a matter of teaching the public that we are an industry just like others and that it’s as professional as any other corporation sponsoring motorsports. Getting back to MotoXXX, I think what they did was extremely influential as they stuck to their guns and basically were the sore thumb it the pits. It was so badass!

What can fans look forward to seeing at the races on the team’s pits when we get the series started in a couple weeks?

Right now we are trying to go at it careful as possible as there might be some restrictions on what we can do. Like I said before, we are looking at this long term. One of the things I’d love to do is bring some bands to do signings like Slayer, Machine Head, Exodus, or any band that has a good following in the moto scene. Some of the artists are HUGE moto fans too, so this would make perfect sense. Of course, we also want to have a more lifestyle experience at the pits. We are thinking of ways to get some free music samplers to fans and other cool promotional items. Of course, there’s also ideas of after party live shows and so on. We’ll just have to wait and see what are the things we can do and can’t do!

Gerardo has his money on either Eli Tomac or Ken Roczen in the 450 class. – Bigwave photo

We know your ties are with the 250 class, but let’s get your prediction for the top 3 in this year’s 450 class…

…of course you can never count (Chad) REED out; he will win some races!

Thanks, Gerardo! We look forward to seeing you at the races. How can people check out Nuclear Blasts Records and its roster online? 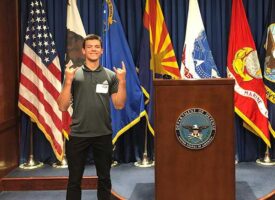