Detroit was the 4th round for the 250 East class this season. The track looked short and turned out to be very hard-packed and extremely rocky. The racing was very good, as the riders had to navigate a 100-yard-long whoop section. After last week’s shake up in the points, with the points leader #49 Martin Davalos missing the Toronto round due to Visa issues, it drastically changed everything. Davalos was now 20 points down to new points leader #6 Jeremy Martin, with #36 Justin Hill only 2 points behind Martin. In the last qualifier before the night show, things got all crazy again. Justin Hill went down hard and was unable to compete. Throw in the fact that Jeremy Martin had a pretty bad main event finishing 13th, and now Malcolm Stewart is our new points leader.

1st #50 Malcolm Stewart: Nobody was going to beat Malcolm in Detroit, especially with the man-sized whoops. Malcolm came into Detroit 10 points back, and he was a man on a serious mission. He was very impressive the entire main and seemed to look forward to the whoops each and every lap. He missed out on a win in Atlanta, he went backwards a little in Daytona, but after that insane come-from-behind ride in Toronto, Malcolm showed us all that the championship is the only thing on his mind. He now heads into the short break with a nice 7-point lead on Jeremy Martin. If I were a betting man, I’d bet the farm that ‘Mookie’ wins this title.

2nd #23 Aaron Plessinger: Although my championship pick may be out of contention, he had one heck of a main event. He rode very well and it looked like he reeled in Stewart at times. I’d like to see Aaron win one before the season is over.

3rd #30 Shane McElrath: Shane has been good the last 2 weeks. He had some bad luck last week while running in 2nd, so there’s no way he was going to let this podium slip away. Imagine how good this guy would have been if he didn’t have the wrist injury coming into the season – he’s still not even suppose to be riding yet. He will win a main next season.

4th #53 Tyler Bowers: Bowers loves the big whoops and it shows. He wouldn’t let off no matter how sideways he was. Like always, in Detroit, Bowers didn’t let up or give up and he had a great ride to get a very hard fought 4th…after starting in 19th.

5th #49 Martin Davalos: Martin was back in action in Detroit, after a Visa issue held him out of Toronto. I hated seeing Martin lose the points lead like that. He looked good early on in Detroit, but had issues in the main. His true speed showed when he was able to make it back to 5th. Unfortunately, he only shaved 1 point off of the new leader’s points lead.

6th #61 Gannon Audette: People are probably scratching their heads, seeing the #61 up front early on the last 2 weeks. They seem to forget how good Audette was coming up through the ranks. He was a well sought-after amateur and rode for Starr Racing before injuries held him back over the last few years. He’s got some serious speed and talent, and him running up front is no fluke.

8th #175 Paul Coates: Not long ago, I watched Coates in his rookie year ride SX and I didn’t see much. Fast forward to this season and Coates looks completely different. He backed up last week’s top 10 with another one this week. He looked very solid out there.

9th #201 Cedric Soubeyras: Good ride for the Frenchman. I’d like to see what he could do with a good start.

10th #63 Jesse Wentland: Jesse kept the top 10 streak going. It wasn’t the result he was looking for (he fell in the wall section while running near the front), but he will be back fighting for top 5’s very soon.

Biggest Stud: Did you see Malcolm Stewart’s pass for the lead in the main event?! I did, and I just wouldn’t feel right giving anybody else ‘stud’ status after that. In my eyes, he was the fastest through the whoops all night long in either class. Hard work pays off, and now Malcolm gets rewarded with a pretty red number plate, as he’s our new points leader.

Biggest Dud: I was disappointed that Justin Hill was unable to compete at Detroit. Justin had a real shot at this championship (he entered Detroit 2 points behind the leader), and due to a practice crash, he was forced to sit out. I think he did the right thing by not riding, but it’s just a bummer to lose a championship contender.

Biggest Surprise: I’m surprised that nobody died in the LQQ when the rider on the Kawi was a total squirrel!

Thanks for reading. I’ll see you after the break. 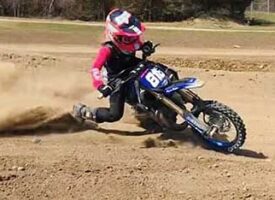 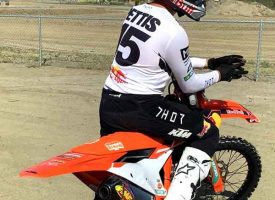