Oakland was a man’s track on Saturday night. The wet conditions made for very scary sections, and almost everyone had issues. You were taking off in ruts and somehow hoping to land in a rut. Once again, our points leader was forced into the LCQ, and once again he somehow turned that into a good start and podium finish. The red plate did change hands, but let’s be serious, Justin Hill has been in complete control for the last 3 weeks. Here are the results and my thoughts.

1st Justin Hill: Justin is in complete control of the West. He was sick all week, then had a piece of plywood jump out and bite him in the main, and he still got it done. He’s a fun to rider to watch and now he will run the red plate with a 1-point lead over McElrath.

2nd Martin Davalos: Martin just can’t seem to seal the deal in the main events, kind of like his Snapchat game. Too soon? My bad. Anyways, Martin once again was very good all day long. He mentioned it was his 24th heat race win…time to move up.

3rd Shane McElrath: Shane has had to make it into the main event via the LCQ the last two weekends. That’s a very scary thing for a championship contender. He was gifted a pretty good start after the Austin Forkner pile up. He had to give up his red plate to Justin Hill, but even worse than that, any control he had is in Hill’s hands now.

4th Jimmy Decotis: I was super-impressed with Jimmy D. He’s the lone Geico Honda rider with Jeremy Martin out injured, so there is a lot of pressure. He stayed strong all main event long and looked like he was going to get McElrath at the end for 3rd. Good Job, Jimmy!

5th Phil Nicolletti: This was Filthy’s best ride yet. He looked good in the rutted conditions. I don’t think he gets the same result on a dry Oakland track.

6th Aaron Plessinger: Starts have hurt Aaron all season. He definitely had a win in him. I was very impressed how he was coming through the pack. It looked like he hit the same piece of wood that claimed Hill, and that slowed him down a bit. It looks like the championship could be out of reach, so now he needs to ride for wins.

7th Kyle Chisholm: Good ride for Kyle, but I still feel like this is a step back for him in his career. The 250 class in SX is a regional class to give the younger riders a chance to get their feet wet and mature. It’s not meant for guys to drop down to prolong their career. Maybe the AMA should implement an age rule like they have in the GP’s?

8th Justin Starling: Justin joined the JMC Motorsports team this week when Noah McConahy left to fill in for the injured Tyler Bowers at the 51 Fifty Yamaha team. Starling looked good on the new ride and scored an impressive 8th which is a career best.

10th Heath Harrison: Yet another fill in rider, this is a fantastic ride for Heath. I hate to be ‘Debbie Downer,’ but man the West is weak this season compared to past years.

Biggest Stud: Justin Hill is my stud. He just looks so in control of the entire West right now. The red plate is his, and I don’t see him not winning the West Championship.

Biggest Dud: I’m bummed with how shallow the talent is in the West. Usually, it’s pretty deep, or at least on par with the East. Not this season.

Biggest Surprise: I was shocked with the 2 big mistakes by Austin Forkner. I don’t know how he didn’t get clipped in his heat race when he squirrelled out across the rhythm lane. Let’s hope he is ok after Lil Hanny rode over his head. 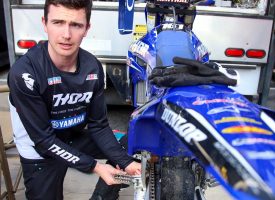 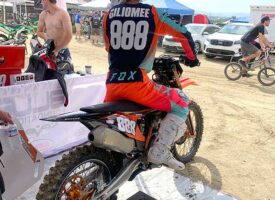 On the Radar: Bradley VanLeeuwen