‘Out of the Blue’ is brought to you by Schrader’s. Check them out!

This week, we get to know Calgary, Alberta’s Samantha Puky. -Paul Puky photo

How did you get started in racing?
When my older sister graduated out of grade 2 my parents bought her a Z50 Honda. That summer she learned to ride and my brother and I rode passenger with mom and dad on Honda CT70’s when we went camping. The next year I started riding the Z50. Two years later my dad took us to Blackfoot and got us into the Tuesday Night Mini Moto’s, so I have been racing since I was eight. From there we started racing WRMA Spring and Fall Super Series and AMSA races.

As a little girl, did you ever expect to be this deep into a sport like motocross?
I started riding so young I don’t think I ever really expected anything, I just new I liked riding. Once I got onto an 85cc my riding improved so much I started taking racing more seriously and from then on I would ride and race as often as I could.
Do you think motocross is harder for a female to compete in?
No, not really. There are so many class to enter, we are able to enter whatever best fits our riding ability.

“The last couple of years I have been focusing and establishing my non-motocross career. I have been busy working and riding/racing when I have a spare weekend. I hope this year I am able to get some more days off so that I am able to races as many races as I can.” – Paul Vissia photo supplied by Puky

Who is your favourite rider and why?
I really like Ricky Carmichael and Ryan Villopoto.
Is there one lady racer out there that you think has paved the way for other girls to be successful in the sport?
Jessica Foster was one of the first lady racers that helped get racing going at the National level. At the local level Amber Giroux was the one racer that helped so many young girls, in my opinion. She was a fierce competitor on the track. Off the track she was super-nice to everyone, especially the younger girl racers. She was also a voice for women’s racing not being afraid to stand up for what was right from the local level all the way up to the National level. Without people like Amber, the ladies’ racing would not be where it is today. On a side note, she is also the only lady  to beat my brother in a Junior race.

What is your favourite track and why?
My favorite track would have to be my home track Calgary. I love that it is high speed with lots of jumps. I also really like that there is more than one track to ride.

What are your goals for this season?
The last couple of years I have been focusing and establishing my non-motocross career. I have been busy working and riding/racing when I have a spare weekend. I hope this year I am able to get some more days off so that I am able to races as many races as I can. I don’t have huge race goals. My time to practice is limited due to work so the best goal I can make would be to make top three in ever race I am able to attend.
What are your biggest accomplishments?
My first year of racing SOAB’s I won the Ladies B class. After that I moved up to Ladies A and won more than my fair share of races, and a few years ago I got #10 for a western Pro national number. When I look back at my racing career I feel proud of how much I have progressed.

Samantha hopes to have more time to race this summer and would love to be top 3 in every one she enters. – Travis Wilson photo supplied by Puky

What do you like to do when you aren’t racing?
When I am not working or riding I am likely traveling, sledding, at the shooting range, hunting or boating. I love to be outdoors and being active.
Is it important to have a motocross racer as a boyfriend/partner, or just a bonus?
I don’t have a boyfriend that races. If I did, I would think it would be a bonus – one more thing to enjoy doing together.
If you ever have children, will they be motocross racers?
If I ever have children I would love for them to race.
Who do you want to thank?
I would like to thank my mom and dad, my brother, Paul at LRX for keeping my bikes on the track, Force Sport for helping me with some entry fees, clothing, stands and ramps. 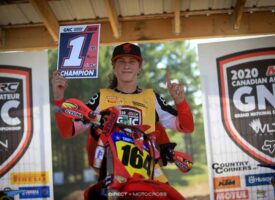 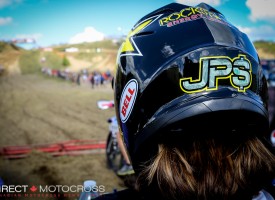 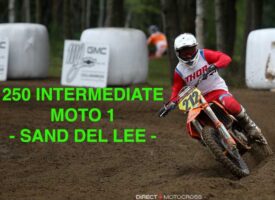