Faces at the Races – Deschambault National

Faces at the Races – Deschambault National

Brought to you by Duroy Racing KTM. Click the link to see what all the hype is about.

Here’s a closer look at some of the off-track action from last week’s round 7 of the Rockstar Energy MX Nationals in Deschambault, Quebec.

Cade Clason getting caught up on social media Sunday morning.

No one likes the sound of their own voice.

Which way to the trouble?

I’m sure they found it.

Mario peeking into the frame to watch Tremblay.

Tommy Dallaire at the podium.

Now THAT’S how you get the day started!

Andy White talking with Cole Thompson before the riders’ meeting. Andy is the one who brought Cole to Canada a couple years ago.

Kyle Regal listening in to what Paul Kingsley has to say.

Davey Fraser will be one of the most popular riders this week in New Brunswick.

There’s a lot of moto experience behind those eyes.

A little caffeinated shot in the arm to get the day going.

After breaking his wrist Sunday, I hope this shot of Teddy Maier looking over his shoulder at the Rockstar banner isn’t some sort of foreshadowing.

Just a few years away from ripping a Pro national on a 450 for this little dude. But he can dream!

Mike Treadwell looking for some wood for his pre-race ritual.

Ross and Shawn getting ready to watch an MX1 start.

A rare serious moment for Shawn Maffenbeier on the stage.

Matt Goerke waiting to get called on stage.

When you win MX1 and lead the points, you can have as many photos in here as is necessary.

Trying to get some face time.

I think I have this shot from all the previous 4 years.

Young Bradbury getting his podium interview.

Is is just me or are his hands strangely huge?!

Wrozyna and Viney put on a good show at the ECAN.

Jeremy McKie looked amazing Saturday winning his moto but had troubles in the final moto Sunday.

JC getting a hug from his mom. You know how much teenagers love that in front of a crowd…

A more subdued ‘knuckles’ from his dad.

I left my cameras unattended for a few minutes and look what I get.

Tanner Ward draws another name from the hat at the KTM pasta dinner.

It was delicious. Thanks, guys.

Hamming it up for the camera.

Mike Smith had his angry hat on all weekend.

Brett Metcalfe and Cole Martinez atop the Milotland landing ramp checking out the track during riders’ meeting.

Cade taking a moment before heading to the line.

This was like a scene from Austin Powers. It literally took them 5 minutes to clear this shot.

It was ‘Mug Shot Day’ in the Keast camp Sunday.

“Hang on. I have to go over there and yell at someone because I’m Papa Schmoke!” Yes, he said that.

I’m not sure what was over there but the JSR’s seemed to like it.

I wandered through the pits and snapped a few artsy shots…

Frenchie using some old school SOS pad on the frame.

I took 5 shots of PO Lavigne and his eyes were shut in every one! Good to see you, PO. You didn’t see me, did you…

To tear off or to roll off?

Hurry up and wait.

Dan didn’t know it then, but his son was about to lead a Pro moto.

The Phillippe Gallant story is a pretty amazing one.

Kyle Swanson is more than happy to help out a teammate.

Moto families share the good times…and the bad ones.

Kaven Benoit gets set to take the stage.

Blake Savage gets his ‘thank you speech’ ready as his team…what ARE they doing?

Someone show up with a brand and a number shaved in their head this weekend at Riverglade. Anyone?

Getting Seth Rarick’s bike rebuilt for the second moto. Meanwhile, a meeting is taking place in the background that suggests maybe Isaiah should just leave the bike alone.

Is this the last picture I’ll ever take of Teddy Maier racing a Canadian National???

Colton and the Gang after his moto win.

Matt Goerke reads the board to thank his sponsors.

Some crafty ‘thumbs up’ positioning in the KTM tent.

Getting the #762 ready for her podium visit.

This guy really didn’t want to let this little guy get this signed Kaven Benoit jersey.

To avoid a repeat of the ugliness, Kaven walked the goggles out to the crowd.

Kaven leaped off the stage to do the same.

This is the only shot I took of ‘scrub master’ Dave Blanchet.

Colton and Jocelyn at the end of the day.

Matt Goerke after another hard-fought win.

Ya, well his thumb is in focus, just like I meant it! Great event, guys. See you next year! 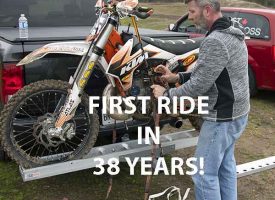 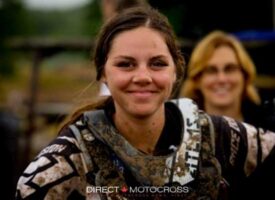 Out of the Blue | Krista Casselman | Presented by Schrader’s 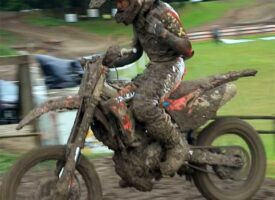 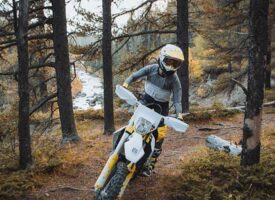 Out of the Blue | Amanda Dobby | Presented by Schrader’s 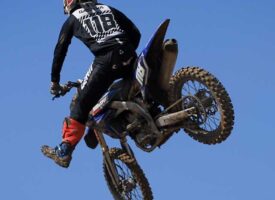