Here’s our look at the riders under the helmets and the people around the pits in this Parts Canada TransCan GNC at Walton Raceway edition of ‘Faces at the Races.’

Head Ref Tim Lee got the week started by going over the rules.

At this point in the week, Barry Hetherington was happy just casually moving moist dirt around. That was about to change…

A look down the Pro pits on Tuesday evening.

The place was packed with young riders ready to head into battle.

But not until after nap time…

Jeff Gaynor had a great week.

Jake Tricco was held off the win list this year.

For the first time, golf carts and pit bikes were allowed to cruise all over, as long as they didn’t act like fools.

Casey Keast and his dad, Dean, all the way from Kelowna, BC.

Cooper Larche’s week took an unexpected turn when he went head first into some tacky dirt. He napped for about 4 minutes but came back to the track and is OK.

I think #66 Christopher Fortier gained a few fans with his speed and his coolness when things didn’t go his way.

Christopher DaSilva needed better starts last week. He had the speed, though.

The lady walking around in linen and wearing a hair net was the health inspector.

Getting a lift back to the pits.

What could possibly go wrong?

Tanner Ward had an up and down week.

If you’re looking for the future of Canadian moto, these three play big roles in it.

Corey Sullivan made the podium.

Brett Lee had one of his most stressful weeks. He battled the weather for the final few days.

Fortier checking out some racing.

Austin Watling didn’t see the podium as much as he wanted or we expected last week.

Pointing out the action.

Graeme Nelson from Two Wheel Motorsport checking out some racing with his son.

Brett hops in and helps Shandell get unstuck while I just stood there and took photos.

Nope, not gonna help this guy, either.

Here are a few muddy faces…

Then the sun came out again for a while and made a rainbow over the Parts Canada booth.

Not the week young Jacob Piccolo was hoping for.

Under the big awning…shouldn’t there be a guy for that?

Brenner Lammens trying to get settled.

Big pretzels I managed to avoid all week.

One of those moments.

Happy to be at the races like the rest of us.

Getting Davi Millsaps’ bike ready for Claudie Lapointe to race.

I get the feeling this is just the beginning of Colton Facciotti’s days of chasing after his son at the race track.

She wasn’t happy with her Junior performance and even said she “made a fool of herself.” A little harsh, Kennedy.

Talk to the calloused hand!

Can’t you just hear the sound affects being used here by Kyle Swanson?

Flavouring up the snow cones.

Jeff Ward will be spending some time at Club MX after Tanner was awarded our DMX Total Devotion Award this year…and also got the coveted flower pot!

Bill Van Vugt was there but without a motor.

Jeff Morgan getting the muddy shots!

Wes Wrozyna has been rolling bikes to the line at the TransCan for a long time.

Mathieu Deroy heading to the line.

Steve Simms at the line.

Davey and Hailey in their happy place.

Mitch Goheen getting the video shots.

This little guy was hilarious at the podium.

Kaven was busy on his way to the stage.

Maff with a little face wipe.

Hey, this is serious, Mathieu!

Joey gets a hug from mom.

Thumbs up, Ryeley. Not bad for still having a very sore hand!

Not the way Jess Pettis was hoping his day would go.

Cale Foster at the line.

Steve Matthes came from Budds Creek to check out the action.

Let’s see YOU get a normal photo of Shawn!

Nate getting the bike ready for the next moto.

Jess Pettis is not a crook…(Google it, Bowker!)

I guess this is the last we’ll see of the Pettiseseses for a little while, at least.

What’s not to smile about when you’re at the races?

Brett Cormier showed some skills in the dozer last week.

See you at the AX Tour, guys.

Um, you have cake in your teeth…mostly icing.

Brett aged about 7 years…from the start of this column!

Joey Crown and his supporters on stage.

Kaven Benoit is the 2016 King of Walton.

But somehow Marco Cannella ended up with the champagne…and thinks he won something.

Joey was a little late on the cork.

Brad and Kaven showed him how it was w=daone.

That is a cool and rare trophy to have.

If you had told someone they were going to be wearing a hood earlier in the week, they would have thought you were crazy!

Dylan Wright doing likewise. Oh, and I heard he’s got his AMA license to race Ironman this weekend.

John John Pauk has a long history at the TransCan, but someone tell him his tag is sticking out!

Brock Leitner in his new garb for the week.

They were running a skeleton Rockstar Gal crew.

Allison Kennedy Davies was back in action for the weekend.

Mikey Walker with the horns.

Everybody was doing it!

Thumbs up from Joey.

OK, that will do it for the 25th anniversary Parts Canada TransCan. I couldn’t finish this without a huge shout out to Dave Bell for another amazing job all week long. He was feeling it the last couple days but he made it! Kudos, Dave. See you at the races…

Thanks to these guys who stepped up to support our coverage for the week: 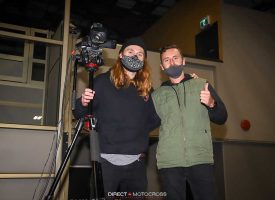