Anytime is a great time for another cup!

While the DMX Canadian MX Weekly Wrap-Up Show presented by Canada’s Motorcycle and FXR Racing loads up to Vimeo, I thought we’d go over the motos from Sunday at Moto Valley in Regina, Saskatchewan.

It was round 4 of the 2015 Rockstar MX Nationals and after what happened last year (2nd motos were cancelled due to rain and mud) we all held our breath as clouds gathered and the wind picked up just before the first MX1 moto.

It did rain pretty hard, but, in the end, it was pretty much exactly what the track needed because MX2 riders came off their 2nd moto saying the track was perfect!

Here is a bit of a play-by-play of the action:

What impressed everyone early in the day was how fast young Intermediate rider, #56 Kyle Biro, qualified. He was very close to the top MX2 times and went to the line for the first moto with 7th gate pick. Unfortunately, when the gate dropped for moto 1 #32 Jared Petruska was left behind the pack in the sweeping, high-speed,  first right turn and he wasn’t moving.

As the group headed off for an exciting moto, we stood by Jared and waited for him to come around and start moving. Would he be OK? Would he be OK enough to get himself back in the race? Would he be good enough to get off the track under his own power became the correct question. In fact, once he started moving around he was helped to his feet to get sat in the first aid quad but fell to the ground in a delirious heap to the dismay of all of us there.

There was no getting around it, the first MX2 moto would have to be red flagged and re-started.

It was interesting to see #123 Monster Thor Kawasaki rider Brett Metcalfe packing the gate for his California buddy #746 Brian Brimhall. #21 Honda Canada TLD GDR rider Jeremy Medaglia grabbed the first moto holeshot but when the gate dropped for the restart he couldn’t math that start. #1 Royal Distributing Fox Racing KTM Canada rider Kaven Benoit grabbed a pretty sizable holeshot on the restart and did what he could to check out.

Nauditt’s teammate #291 Dylan Delaplace was just rolling around the track after some apparent trouble on lap 3, while the top 2 riders, Benoit and Decotis, (Nauditt had troubles on that 3rd lap) began to pull away from the great battle between Medagllia, #14 Rockstar OTSFF Yamaha’s Shawn Maffenbeier, Burger, and Devil’s Lake MX rider #762 Blake Savage.

Behind this group of 4 riders was a gap back to #444 Dustin Creson who had pulled a slight gap on Canada’s Motorcycle FXR Yamaha’s Dylan Wright, #153 Ryeley Gallup, #39 Vernon Motorsports Yamaha’s Jess Pettis, and Intermediate phenom Biro.

#17 Redemption Racing Fly Dragon KTM rider Seth Rarick was up in the top 5 after the second turn but he had bumped into the rear wheel of Creson in the 3rd corner and gone down in a heap. It took him a while to get running again and he was now putting on a charge through the field from last place.

At about the 6th lap, Benoit was still out front with Decotis a few seconds back. Behind them, the 4-rider battle raged. Creson still rode alone in 7th, while Wright, Gallup, Pettis, and Biro were engaged in a great 4-rider battle of their own. Nauditt was up and running and trying to chase down that pack with #57 Strikt Racing rider Todd Minnie behind him with #84 Teagan Williams and #24 Danyluk Racing Suzuki rider Kyle Swanson in hot pursuit. They had established a gap over #803 Florida rider Marcus Nilsen who was chased by a big pack of riders who now included Rarick, who was on the move.

Medaglia would mess up and drop back behind Burger, and Creson was giving him all he could handle late in the moto. Behind them, Gallup and Pettis were going at it as were Swanson and Minnie.

With only 2 laps to go, Benoit still had a gap on Decotis. Maffenbeier, Savage, and burger were pretty close in their battle for 3rd, and Medaglia still had Creson on his rear wheel.

At the checkered flag, it was Benoit with a lead over Decotis that was near 20 seconds, Maffenbeier, Savage, Burger, then the Medaglia/Creson battle. Behind them, Gallup and Pettis held a gap on Wright who, in turn, had a gap over Biro. Nauditt came through a short way behind Biro.

If you know anything about the start straight at Moto Valley, you know the edges are where you’ll find the firmest ground. Well, #194 Devil’s Lake MX rider Jake Streichert got the memo! He pulled one of the best holeshots you’ll see in a top-level motocross race. I’m sure he must have been as surprised as we were when he headed down the following straight with such a substantial lead.

By the time they came around to complete their first lap, it was #7 Rockstar OTSFF Yamaha rider Bobby Kiniry out front where he’s been wanting to be all summer. Behind him was Honda Canada TLD GDR’s #1 Colton Facciotti, #3 Parts Canada Thor Husqvarna’s Tyler Medaglia, Royal Distributing Fox Racing KTM’s #148 Cole Thompson, #123 Brett Metcalfe, #101 Rockstar OTSFF Yamaha’s Matt Goerke, #5 Monster Thor Kawasaki’s Teddy Maier (who was fastest qualifier and due for a solid day), #761 Redemption Racing Fly Dragon KTM’s Cade Clason, and then Streichert, who was probably just then taking his first breath!

That’s when the rain picked up and made the track slippery and vision difficult.

On the 3rd lap, Facciotti had gotten away a little on Thompson who had the close battle of Metcalfe, Kiniry, Goerke, Maier, and Medaglia on his heels.

Metcalfe was on a tear and had closed in on Faciotti out front by the 5th lap. Their battle would rage for a few laps until Metcalfe would put a pass on Facciotti that would stick. They went back and forth a few times before this final pass.

Kiniry and Medaglia were fighting a good battle as were Brough, and now Honda Canada TLD GDR’s #30 Kyle Keast and Da Silva. There were good battles all over the track and the #55 Yamaha rider Keylan Meston/Duroy Racing KTM’s #33 Shawn Robinson battle and the FXR KTM rider #74 Josh Allen/#36 FXR McKee’s Yamaha rider Hayden Halstead were two of them!

At the 1/2, the battle for the lead was close between Metcalfe, Facciotti, and Goerke. Behind them, Thompson and Maier were fighting followed by Kiniry, Medaglia, Clason, Schmoke, and Streichert. Brough and Keast were still at it behind them.

It wasn’t until late in the moto that Metcalfe broke a way a little while Facciotti continued to push behind him with a gap on Goerke. The field had begun to spread out behind them and riders began circulating unchallenged on their own until you got to the Da Silva/Robinson fight for 14th spot.

At the flag, it was Metcalfe, Facciotti, Goerke, Thompson, Maier, Kiniry, Medaglia, and Clason in what could have been the best moto we’ve seen yet this season.

The rain stopped and the track actually became about as perfect as you could imagine. Umbrellas were put away (except for photographer John Meeny who was caught out in his full-length rain coat and proceeded to make his own gravy in the sun) and rubber boots stowed.

It was Jeremy Medaglia who grabbed the holeshot (had the first gate drop not been red-flagged, that would have given Jeremy the ‘Royal Distributing Triple Crown’ and doubled his money) followed by Decotis, Benoit, Maffenbeier, Savage, Burger, and Nauditt.

Benoit would go down on lap 2 and struggle to get going as other riders got involved. When they came around for the second lap, Medaglia had Decotis on him as they put a slight gap over Maffenbeier. Creson had now moved up into 6th place behind Savage, ahead of Nauditt, Rarick, Biro, Gallup, and Pettis. Behind Pettis was a gap to the now-charging Benoit with Williams, Minnie, Wright, and Nilsen behind him.

At the half, Medaglia had established a lead over Decotis (who was charging) who had Maffenebeier not far behind him. Behind him, Burger, Savage, Nauditt, Benoit, and Creson all rode with space in front and behind each of them.

Nilsen and Williams were engaged in a good fight, as were #51 Kawasaki rider Brock Leitner and Wright.

At the flag, it was Medaglia, Decotis, Maffenbeier, Burger, Savage, Benoit, Nauditt, Creson, Rarick, and Pettis.

Interestingly, Medaglia, Maffenbeier, and Benoit all tied for 2nd with 50 points as did Burger and Savage for 5th with 44.

By lap 3, Goerke held a slight lead over a great battle between Thompson, Medaglia, and Metcalfe who had Facciotti, Maier, Kiniry and Clason behind him.

On lap 5, the battle up front raged between the top 7 riders! It had the Regina fans in a frenzy. Davenport rode alone in 8th behind this fast-moving train of riders.

It was just before that lap that #5 Maier had disappeared. It turns out he would have a header pipe problem and pull into the mechanics’ area for repairs. He re-entered the race just ahead of the leader, Goerke, and continue to battle to un-lap himself until another mechanical issue would force a rare Teddy Maier DNF.

As the race went on, Goerke and Metcalfe waged war out front, while Facciotti and Thompson did the same a small distance behind them. Medaglia wanted back in the fight badly and did what he could to close the gap. Clason rode alone behind him with Kiniry a short distance to his rear.

Late in the moto, the order and fights remained the same a the front. Keast was starting to mount a charge and was suddenly closing on Davenport. He would put in two heroic laps to come within .4 seconds of catching him at the flag.

At the flag, it was Goerke with Metcalfe fighting the roost right behind him, followed by Facciotti, Thompson, and Medaglia not far apart. There was a large gap to Clason then to Kiniry then to Davenport and Keast.

It was another great day of racing to put into the Canadian Motocross books. We now take a break until the eastern swing of the series resumes July 12th at Gopher Dunes for the remaining 6 rounds. The video recap is now uploaded to Vimeo so look for that very soon here on the site. We haven’t even gotten to photos yet (therefore, nothing nice to look at for this race report), but watch for that here soon too.

Thanks for reading and have a great week. 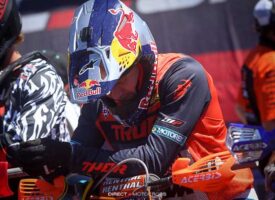 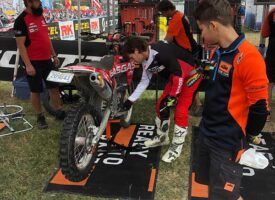