OK, so, I’m having a tough time adjusting to this BC time zone. It’s easy to fall into a pattern and I’m not getting my routine sorted out being 3 hours behind my usual time in the Eastern Zone. Having said that, I’m sorry about my tardiness with this MMC column. I always seem to end up staying up late like I would back at home and then it’s nearly impossible for me to get up and started 3 hours earlier than I would back in Ontario. I realize it’s all poor planning on my part, but there ya go.

Surprisingly, spring is very late in arriving here in Kamloops, BC. I’t s basically been cool, windy, and raining intermittently since I got here a week ago. The same thing happened back home in Ontario, but Emily tells me it was like 31C over the weekend, so summer has arrived. We all know it’s coming here in the Canadian Desert, but it’s taking its sweet time. Before you know it, I’ll be complaining about the regular 38C heat here in The Loops!

I’m going to take a drive out to Whispering Pines to see what’s going on out there as we get set to start the 2022 Canadian Triple Crown Series on June 5th. My concern is the cell reception. I’ve been told that it’s “great,” but I’d like to make a trial run to be sure we can do what we have planned for coverage out there. It always seems that, as we travel across the country, you either get reception with Bell or Rogers, but not both. I really hope this has been resolved. We’ll find out soon enough.

I’m pumped that Greg Poisson will be out at Round 1 to help get everyone the coverage the first round deserves. He’s never been to this track, so I’m sure he’s going to love it.

We’ll also have Chanse Lovell-Smith along to take care of the top quality video duties. Chanse works in the film industry in the Lower Mainland, so we’re all looking forward to seeing what he can come up with.

It’s still 3 weeks away, but time flies and we’ll all be winding our way up the river to the track before you know it.

In every interview I do at this time of year, I always ask if the rider I’m talking to will be lining up for any races before the Nationals start. Well, we’ve seen a lot of our top riders racing across the country the past couple weekends. This past weekend was definitely no different. Let’s go across the country and see what we can find…

Future West Moto series was up in Quesnel, BC this weekend, but results aren’t posted as of this column, so here’s a look back at Round 2 in Kelowna:

Results from this past weekend aren’t up yet here either, so here’s a look at Round 2:

Results from May 8th.

Results from Round 1 this weekend in the Pro Open Class:

Results aren’t posted for the races this past weekend.

5th Place for Shelby Turner at GNCC in Indiana

With just a 6-point gap in the MX2 World Championship, Yamaha Factory rider #93 Jago Geerts was looking to keep the red plate heading into Sardegna and this round did not disappoint. In easily one of the best battles of the weekend, possibly even the season, Geerts went 1-2 for 2nd overall tying KTM Factory rider #28 Tom Vialle who went 2-1 for 1st overall, allowing him to keep the 6-point lead in the World Championship standings.

Vialle had one of the best weekends of his career in terms of his riding. Going into such a gnarly sand track he would have been happy with a podium and instead came out on top. Having being stuck in a first lap crash off the start of moto 1 he fought his way back to 2nd catching Geerts in the last lap with them leading the entire class by 40.7 seconds.

In moto 2, Vialle and Geerts were tire-to-tire from start to finish showing an insane amount of speed with another 39.2 second lead over the rest of the class, as Vialle took the win by 0.339 seconds. Rounding out the podium was Yamaha Factory rider #198 Thibault Benistant who also got both holeshots.

The MX2 battle between Vialle and Geerts was definitely something you want to go back and watch for both motos. This tight championship battle will continue at Round 9 in Madrid, Spain.

This weekend in Sardegna was a weekend to watch in every class as Gebben Van Venrooy Racing rider #10 Calvin Vlaaderen went 1-1 dominating his first MXGP overall win of his career. Vladderen was on an entirely different level than every rider in the MXGP class yesterday in both motos, giving himself and 6D Helmets their first overall MXGP wins. After moto 1, he was the only rider leaving the race looking like he could have kept going for another 5-10 minutes.

After missing Maggiora due to a shoulder injury, GasGas Factory rider #61 Jorge Prado came out giving it his all going 3-3 for 2nd overall after taking 3 weeks off to recover. He is looking to continue his recovery and moving to the top step of the podium in the coming rounds.

Prado’s teammate #101 Mattia Guadanini moved up from the MX2 class this weekend going 11-8 for 8th overall in his 450 MXGP debut. Rounding out the podium was Yamaha Factory rider #959 Maxime Reneaux.

Many are wondering what happened to Honda Factory rider #243 Tim Gajser this weekend after looking absolutely gassed following his 2nd place in moto 1. He was reported to have been very sick all weekend with a viral flu and unfortunately struggled through this gnarly sand track going 12th in moto 2 keeping his championship lead at 79 points.

After Riola, Sardegna showing some life in the MXGP class, expect to see further moves being made in Madrid, Spain at Round 9.https://www.youtube.com/embed/o2Z3FHustng?feature=oembed

We aren’t done with the surprises yet! We had a familiar face show up in the WMX class this weekend. As most of you may know her, 2019 Canadian Triple Crown Series WMX Champion Avrie Berry was lining up for the first time in over a year. Unfortunately, following her incredible season up in Canada, Berry ran into some health issues sidelining her for a few years with difficulties getting back to 100% health to ride again.

Lining up this weekend, Avrie didn’t really have any expectations, knowing where her race fitness was, but wanted to get back into racing rhythm with pushing for top 10 and give it the best she had. She did just that going 16-14 for 16th overall and starting to look and feel like herself in moto 2. You can expect to see her improving in the coming round in Madrid, Spain.

[Update: Avrie will not be able to make it to Spain for the next round.]

Canadian WMX fans can look forward to seeing Avrie back competing in Canada in the near future, as we wish her the best in her continued recovery.

But wait, there’s one more thing…

Italian MXGP legend with his 9 World Championship titles Antonio Cairoli is packed up and on his way to appear at the first few rounds of Lucas Oil AMA Pro Motocross Championships starting May 28 in Pala, California, at Fox Raceway. Everyone over here is excited and very interested to see how he competes in the stacked 450 class in the USA. If you’re counting him out just remember… GO FASTA, EAT PASTA 😉

Been seeing everyone back home in Ontario posting photos about riding over the weekend in 30C weather. I hope it was good enough to get out, wherever you are. I won’t be back on the bike until I get home, and that won’t be until the end of June!

We’ll get our 2022 Canadian Triple Crown Series preview podcast done in the very near future, so watch and listen for that.

Have a great week. 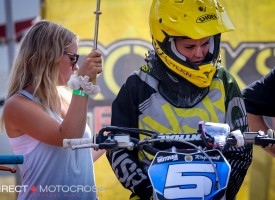 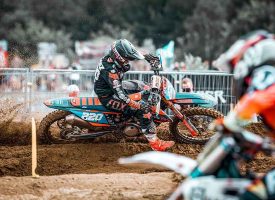 Out of the Blue | Mélanie Perez | Presented by Schrader’s