Well, there goes another Halloween weekend. Yes, tonight is actually the big night for the door-to-door portion of the festivities, but it’s always the Saturday night before the 31st that is ‘grown up Halloween.’ If you’re from the Ontario region of Canada, you may be familiar with a motocross track that everyone seems to list at or near their top of favourites – Auburn. Tom Bitz was the owner of that land and used to hold memorable races at his facility until just a few years ago. Unfortunately, Brett Lee tried holding a few more events on the land 2 hours north of London, but his plans seemed to be the catalyst for torrential downpours. Every time he tried to hold a race, the heavens opened up and the place got flooded out. It was uncanny and spelled the end for the racetrack. Where am I going with this, you ask?

‘Bitzy’ owns the building in downtown London that holds the annual Halloween Bash, and it’s always a great time. As it should be, you aren’t allowed in without a costume, and some people must quit their jobs to work on some of the masterpieces! When the awards were announced, it was my old buddy, Des, who won with his picture-perfect Lemmy from Motorhead costume. It was absolutely spot on!

They couldn’t find him when Tom made the announcement so I think the y moved on to the runner-up, spaceman. It was also great…but not Lemmy great.

Of course, Bitzy couldn’t name himself as the winner but…

He is actually sitting in a little buggy he could roll around the party in. That’s a zombie mom standing behind him that appears to be pushing him. It was good.

And I was Dr. Sinister.

Emily was Madame Yes and I was Dr. Sinister (Google it, Bowker!). Growing up, I was just about the biggest Flintstones fan you could be. In fact, my buddy, Craig, and I used to play ‘Flintstones Hangman‘ when we were supposed to be listening to the teachers in Grade 13. Each answer had to be a character from the show.

The episode with Madame Yes and Dr. Sinister is arguably the greatest, but certainly the scariest, show they ever did! “We were on our way to the supermarket to get some brontosaurus burgers…and some buns.” Meh, we didn’t win the contest, but it was fun.

We only get maybe 4 kids at our door on Halloween here, so I’d better get over to the store and get way too much candy to eat myself, starting at about 8pm tonight!

Round 5 of the Canadian National Arenacross Tour met head on with the Future West Canadian Arenacross Championships Saturday night in the interior city of Penticton, BC. With ‘Clash for Cash’ points leader, #2 Colton Facciotti, racing a Honda CR500 2-stroke at Gopher Dunes over the weekend, it left #101 Chris Blose as the top rider from the AX Tour to hold down the fort against the top riders from the western series.

#1 Ross Johnson from Washington State is a 3-time champion and wanted to show what he could do against the top riders in the other series. Supercross main event regulars (and teammates) Noah McConahy and Chris Howell, were also in attendance. 2016 MX2 runner up, #15 Shawn Maffenbeier, joined in and found himself on the podium, once. Undefeated rider in the Future West series, #20 Jess Pettis, wanted to keep his streak alive but didn’t have the Lites main he wanted but grabbed 2nd in the Pro Open main.

The Future West series takes some time off, but the AX Tour series heads to Calgary for the double-header finale this coming weekend. Chris Blose is the now the only rider capable of taking home the Parts Canada $25000 Triple Crown for winning the final 3 ‘Clash for Cash’ races. See you in Calgary!

Check out American #12 Steve Mages‘ last lap pass for the race win. Steven raced the first couple stops of the Canada AX Tour in Sarnia and Barrie. Canadian #651 Kade Walker was back in action.

Half Canadian, Cole Martinez, and Canadian national regular, Jesse Wentland, were in Holland for this one too.

Have you watched this Tim Gajser Fox video yet? No? Well, it’s pretty good, so here’s another chance.

Australian SX | Round 3 Results and Points

Have a great work or school week, everyone. The forecast in these parts of the country will allow for lots more riding, so go enjoy it while you can. 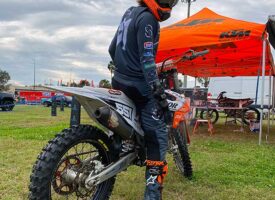 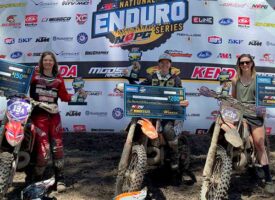 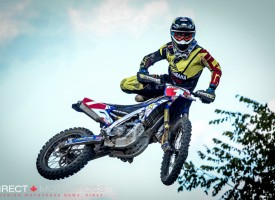 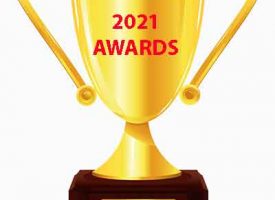 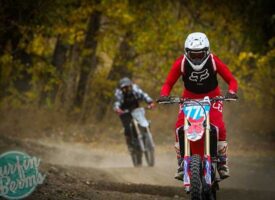 Out of the Blue | Britny Martens | Presented by Schrader’s