Name: Margot Kirkwold (or by some people at the races, “the Cookie Lady”)

Classes: I ride in the Ladies class

I started racing by being invited by a friend. I had never seen a race before and had no clue how it even worked. I tried MX and hare scrambles the first year.

As a girl my life revolved around horses. I used to curse the boys that rode past on their dirt bikes and scared the horses while out riding. Never did it occur to me that I would ride and compete dirt bikes.

I think the support for females to compete at the higher levels is lacking, whether it is for sponsorship or even events. If it wasn’t for Denaye Arnett and Camille Bunko stepping up a few years ago there would be no national races for the ladies. They fought to keep the ladies national race and it has been very successful. We have even attracted some US ladies riders as their series is diminishing and spread so far out.

“I don’t think I have one favourite rider. Everybody has their own journey and story of how they got to the top. The one thing I know is they all had to work very hard to get there.” ~ Denaye Arnett photo

I don’t think I have one favourite rider. Everybody has their own journey and story of how they got to the top. The one thing I know is they all had to work very hard to get there. Some may have had it a little easier financially, but without hard work and determination they wouldn’t get that far. That being said, Ryan Dungey is one that I think is a very good role model.

I don’t think you can say just one lady has paved the way. Different women have helped in many different facets of the industry. Shelby Turner and Lexi Pechout are two Alberta girls though that have managed to do very well on the international stage and are multi-disciplined.

Jared Stock is somebody to look up to. He has had success in MX and now is being successful in off-road. He has worked very hard and does whatever it takes to get where he needs to go, but not at the expense of others. He works hard to promote riding in general and is very helpful as well.

Any track is my favourite track. Can’t beat a day out on the bike, no matter where you are. Although, I do like some a bit better than others (Laughs).

Hero? Well that is a tough one. I think that anyone who goes out and puts in their best effort is doing great. We are all at different levels and you just need to do the best you can for who you are.

Well, my goals are pretty simple. When you come to play the game later in life it is hard to compete with the younger girls who have been riding for a while. Fear can become a factor which is limiting. I just try to do the best I can and maybe improve my ride each moto – corner a little faster or jump a little farther.

My biggest accomplishments have been finishing the AMSA Ladies class 4th overall the last two years. There are some younger girls that are improving quickly and are nipping at my heels.

I love all parts of the races. The people are great. The first race of the season is always the best, as you get to see all the people you haven’t seen since the previous year. Sitting on the line just waiting for the gate to drop and then just going out and doing the very best you can do.

Margot loves every aspect of being at the races. ~Bill Kirkwold photo

When I am not racing I am at home helping out on the farm. I do miss some races due to farming.

Is it important to have a motocross racer as a husband, or just a bonus?

I don’t know that it is important but it probably helps.

Will your children be motocross racers?

I have two sons and one of them raced with me. When we first started racing he was my excuse to legitimize my racing. I couldn’t let him have all the fun and I needed something to pass the time while there. He has since graduated and has a job that takes him away, so this year I went racing all by myself.

I want to thank my husband for putting up with my crazy mid-life obsession. All the other riders who inspire me and challenge me (and to the ones who don’t run me over when they lap me) and last but definitely not least, all the clubs who work so hard to put the races on. They face many challenges but work so hard for a sport they love. 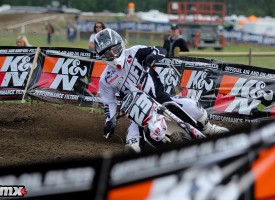 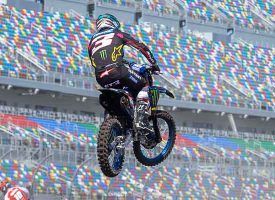