The first full day of racing took place today at the 25th Anniversary Parts Canada TransCan GNC at Walton Raceway. Although there may be a few empty gates in several classes, the level of competition seems to be higher than ever. Because the threat of a severe storm late Wednesday, 4 motos were canceled and were to be run at the end of the day today.

Here’s a look at some of the racing action from the track just north of Slabtown, Ontario.

#66 is Christopher Fortier who is from Quebec City but lives in Florida. He won the MX3 Intermediate first moto.

If #1 Chris Pomeroy doesn’t look like he’s trying very hard here, it’s because he was around a minute out front in the +40 class. He will be going for his 4th title in the class.

There is nobody who can equal the speed of #44 Kennedy Lutz in the Ladies class at the TransCan this year. Only Kennedy can beat Kennedy.

Did #8 Kyle Keast redesign the Walton track to suit his style? I don’t know but he won the Vet Master first moto today.

I’ve watched Texas rider #52 Ethan Mann race all the big American Amateur Nationals since he was a little kid. He was fast then and he’s fast now. He won the Supermini 2nd moto today.

#59 Joey Crown is showing why he’s chasing a Pro contract down south. He is the one to beat in the Youth class and has won both motos, so far.

The Schoolboy races are ones to keep your eyes on this week. #46 Marco Cannella and #184 Tanner Ward are putting on quite the show, along with #52 Ethan Mann. Marco won the Schoolboy 1 first moto.

#184 is credited with the first Schoolboy 2 moto win ahead of #46 Cannella and #424 Austin Watling. Tanner led until the final lap when Marco got past. Marco would eventually get penalized one position for “using a line off the track” to make the pass.

#66 Casey Cochran from Georgia won the first 65 (7-9) moto at the end of the day with #22 Preston Masciangelo right on him as they weaved through lapped traffic. Keep an eye on these two.

As I was heading for home, young Carter Ward was winning the Stryder race on the little BMX track.

And these people were…I’m not really sure what they were doing, actually.

See you back at the track bright and early for another full day of great amateur racing! That doesn’t look safe, btw. 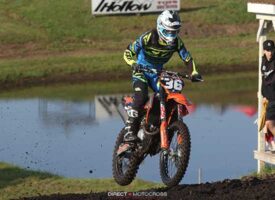 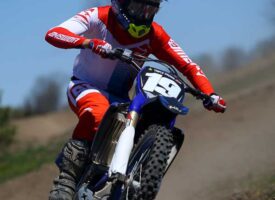