We’ve known Logan Karnow since he was a young ripper on his KTM Supermini and would come up from Ohio to race the TransCan at Walton Raceway.

Since then, he’s ben a staple on the Canadian PRMX team for Supercross and at select races here in Canada.

Well, he’s made some big changes for the 2021 season, so we wanted to talk to him about that, for sure, as well as what he’s been up to since we last saw him.

We weren’t able to get in touch with Logan before the Frid’Eh deadline, so here’s what he had to say when we did manage to speak with him.

Direct Motocross: Hey, Logan. You’re one of the American riders I normally see the most, but 2020 was a little different. For those out there who don’t know you, can you tell us how old you are and where you grew up? And, while we’re at it, how did you get started racing motocross?

Logan Karnow: Yeah, what’s up man? I’m from Vermilion, Ohio, and started riding dirt bikes back when I was 3 years old. Both sides of my family were big into racing Motocross and got me started, and the rest was history.

I’ve got photos of you at the TransCan on an 85 with #471, so I think we know the first half of this next question. What was your first race number and why did you choose it?

Yeah dude, exactly!! I actually got assigned that number at Walton back on an 85 and did very well and I thought it looked cool so I just kept it. Haha.

Being an Ohio racer, who did you grow up idolizing and why?

Honestly there wasn’t really anyone I idolized. Obviously I looked up to the fast guys but no one really in particular!

Who did you come up through the amateur ranks battling?

Shoot, someone you guys would know is Cade Clason. We grew up racing since we were on 50s and lived pretty close to each other. We were always at each other’s house. It’s pretty crazy to ride for the same Pro team this past season coming from 50s.

You’ve been coming to Canada for a long time and were also on the PRMX team for many years. How did you first connect with Julien Perrier? It’s been a heck of a run! Can you give us a highlight of what it was like?

So, when I was just doing some of the Supercross races with my dad, I got some motor work done by TLR and he was also doing some work for Julien. Julian asked him if he knew anyone interested in a bit of support and he threw my name out there, and me and Julien linked up and the rest was history!

Oh yeah, in Canada! I was giving (Josh) Cartwright some shit about getting number 51 because that’s been his number ever since he was a little dude. I only did the Supercross part of the series and I would say it went okay but not great. It was pretty darn stacked in ’19 and I think every race I got 4th. I led half of the last main event and then just made some rookie mistakes. Ended up 3rd in the championship for the second year in a row which wasn’t bad.

And then you didn’t come up here to race in 2020. What did you do all summer?

Yeah, I figured with all the BS going on right now and it being difficult to cross the border, the series cutting the purse, etc… I would just hang around at home and build a little business doing riding schools, and that actually took off!! Super pumped on it.

Cool! How did your 2020 Supercross season go? Is there a highlight?

I would say it went pretty solid. I made 7/8 main events. Got a couple top 15s…and was just a solid main event guy. I actually made a 450 main event in Salt Lake City, too, which was absolutely unreal!!

But now the big news is that you’ve parted ways with PRMX and are going to team up with Bubba Pauli, right? Can you tell us a little about how this all came up and why?

Yeah. First off, I wanna thank Julien for everything he’s done for me. Shoot, we still talk about every day. Haha. He knows how thankful I’ve always been for him, but yeah, Bubba contacted me some time after Salt Lake City and we kinda just started talking here and there and I really liked his program. He offered me a lot and I just couldn’t turn it down.

What are you doing now for training? We’re getting close to the racing season. What class are you racing?

Basically, just drinking lots of white claws. Nah, just kidding. I am just doing exactly what Bubba is doing. Bubba works his butt off and is kicking my butt but I need it. I do the gym, motos, yoga, stretching…everything with him and our other teammate, Joan Cros. None of us wanna be the low man on the pole so we push each other to the limits!

Is there an outdoor component of this new team? You’re a Supercross-only kind of guy, no?

Yeah, Motocross is not for me. Lol, I’ve always been more of a technical rider but not see how fast I can hit a sand berm in 4th wideeeeee. Lol. The team is just a Supercross only deal, so that’s perfect for me.

How much longer will you chase this?

Shit, I say every year is going to be my last year but when you keep having your best season of your career it’s hard to just walk away! But being able to make a living doing what you love is pretty rad, too.

What would you do after racing? Have you thought about that yet?

Yeah, my dad has a trucking business that I kinda dabble in if I’m injured and kinda learned that business, so I’ll probably do something like that!

Oh, since we’re in the season, what’s the best Christmas/Holiday movie?

I feel like you can’t go wrong with the OG Rudolph.

OK, I’ll see you at a race sometime soon, I hope. Thanks for talking with us again. Good luck and who would you like to thank? 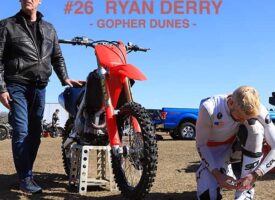 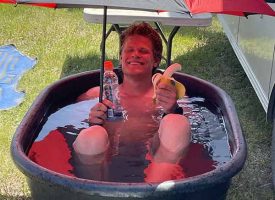 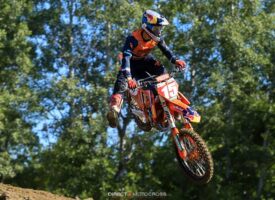