Round 3 went off this past Saturday in Calgary, and the racing was good. Cole Thompson won both motos and looks pretty unstoppable at this point. Luckily, guys like Shawn Maffenbeier, Dylan Wright, Mark Worth and Brandan Leith have other opinions.  After Cole, there are 4 or 5 guys that are serious podium threats. It should be a great summer of racing. Let’s take a look at the results and my thoughts.

2nd Shawn Maffenbeier 2-2: Shawn is Mr Consistency. Unfortunately, it has been 2nds. He really does look great out there. He has the speed and talent to win this whole thing, except for that darn #4 machine has other thoughts.

3rd Mark Worth 3-4: This guy is good and has great style. He came into the series a round down, so he doesn’t have to think championship, he can just pin it and go for wins. He has the speed, and if Thompson has a bad start, it’s possible Worth could win.

4th Brandan Leith 6-3: Brandan isn’t a fluke. He’s going to be up front every moto. And for the record, he didn’t throw anchor in the first moto, he got a rear flat. Please, someone hook this guy up and get him East. He won’t disappoint.

5th Dylan Wright 4-7: Dylan was still limping very bad in Calgary, but blocked out the pain and rode well. We are heading to the East, and this guy is full of confidence. He and his team think he should be winning motos, and they’re probably right. He will be scary fast on the East.

6th Jess Pettis 7-6: Bit of an off day for Jess. He is a different rider from last season. Get used to seeing the #20 deeper inside the top 10 and close to the podium. Can you say ‘most improved rider’ 2 years in a row?

7th Tallon La Fountaine 5-9: I honestly don’t know anything about Tallon, except that he’s from Redlands, California, but he’s obviously go some serious talent.

8th Brad Nauditt 10-5: Not so great 1st moto for Brad. He blew up yet another motor. He also is a question mark for the East. All he needs is some travel money…anybody?

9th Casey Keast 8-8: This kid is good. Casey looked very comfortable battling with some seriously fast guys. He should be on a team next season and able to do the entire series.

10th Marcus Nilsen 10-13: Solid rides for Marcus. He will pick up speed as we head East. With a year under his belt, he is looking more comfortable with our series.

Biggest Stud: ‘Little Muff’ is my stud. This guy has really stepped it up and looks great.

Biggest Dud: It’s too bad that injuries have taken 2 of the classes top guys already. It’s going to be very hard to beat Thompson, and Jacob Hayes and Jeremy Medaglia were two of the very few that had a chance.

Biggest Surprise: Brandan Leith is my surprise. How can a guy sitting 3rd in points not get any support. Go talk to the guy…one of the nicest guys in the pits. American or not, he’s a hard worker and will ride anything. He just wants to race.

It was The Davi Millsaps Show in Calgary. Davi was just that fast, and on another level. Mike Alessi looked fantastic in both motos, but couldn’t match the speed of Millsaps. Points leader Colton Facciotti had an off weekend and finished a distant 7th. There are a few guys still adjusting to new bikes, so I honestly think the racing will get tighter as the series goes deeper. We are now our way East, and have you ever seen this many sand specialists? Not a chance! It will be very interesting by the time we hit Gopher Dunes to see what happens. Let’s look at the results and my thoughts.

1st Davi Millsaps 1-1: The word ‘wow’ comes to mind. Davi is doing everything as close to perfect as he can. His starts are good, his sprint speed is insane, and his fitness looks really good. He got out front and was instantly gone both motos. Mike Alessi mentioned that Davi sprinted away so fast early on that he didn’t even know where he was. Davi is going to be very very hard to beat straight up.

2nd Mike Alessi 2-2: Mike rode 2 almost perfect motos. One problem though…Davi Millsaps was in Calgary, too. I was happy to see Mike’s starts back, and he honestly rode pretty flawless. The good thing about Mike is that he truly believes he can beat Davi and he will bust his ass trying to. Great ride for the 800.

3rd Brett Metcalfe 6-3: Things are starting to look better for Metty. He got quite a bit of testing done this week, and it showed. He’s still not with the top 2 or 3 yet, but he’s going to be soon.

4th Kaven Benoit 5-4: Benoit looked great in Calgary. He has been saying that he needs to start up front with these guys, and he did just that in moto 2. He is one of the hardest working guys and the sky is the limit for him in the 450 class. He will be on the podium very soon.

5th Vince Friese 4-6: Vince got the holeshot in moto 1 and looked pretty good. In moto 2, he was close to the front, but went backwards a bit. He seemed to have a flat spot in the middle of moto 2, but he was able to pick it back up and gap Tyler Medaglia. I still feel he has the talent and speed for a few podiums, once he figures out the Kawi.

6th Matt Goerke 3-8: Goerke is pretty bummed out about his performance, but to be honest, he rode great coming through the pack in moto 2. Yes, it sucks that he got docked, and it sucks that he went down on the start in the 2nd moto, but he needs to be positive and believe in himself because the East is coming and he is a beast in the sand!

7th Colton Facciotti 7-5: Colton had an off weekend in Calgary. I’m not sure what the issue was, but you can bet it’s long gone. Just when you think Colton is out of it, he finds another gear and shows his greatness.

8th Tyler Medaglia 8-7: I thought Tyler looked good this weekend. His speed is off of the top 5, but his heart and fitness will be there every weekend. I still think the 350 is a great bike, but there were some rumblings that we may see him on a 450 at a round or 2, once the new 17’s are released.

9th Cade Clason 9-9: Cade wasn’t happy with his rides, but I thought he rode well. I really think he needs a start so he can run with the top guys for a bit and see their pace. He also needs to get a fresh ‘Cartwright!’ I truly believe it is holding him back.

10th Keylan Meston 12-10: Very impressed on how much Keylan improved. He told me he was training down in Cali with some serious fast guys and worked his butt off not to be the slow guy. It obviously worked as he is the most improved in my eyes.

Biggest Stud: I’d be crazy not to pick Millsaps as my stud. He honestly looks that great everywhere.

Biggest Dud: With the top guys being that much better this season, it means that they are into lappers that much sooner. Going into the weekend, you know that you are going to be lapped very early. Be ready for it. Lappers should not affect the outcome.

Biggest Surprise: Keylan Meston is my surprise. He improved that much. 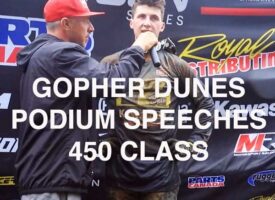 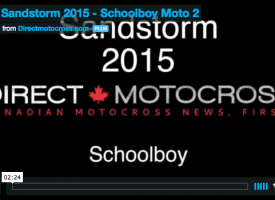 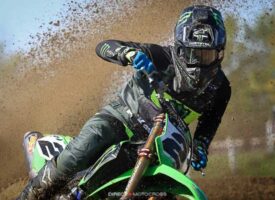