We’re now 1 round into the 2021 Canadian Triple Crown Series Supercross at Gopher Dunes. The racing, as always, was great at the front of the pack. Let’s have a quick look at some of the things we learned from a hot and humid day in Courtland, Ontario.

Kudos to Derek Schuster and the gang for designing a pretty good SX track! I spoke to Kevin Thompson early in the day. He’s seen a lot of Supercross tracks in his day and he came right out and said that Derek deserves a lot of praise for building a good track like this. Of course, his son, Cole Thompson, is the smoothest rider you’re ever going to see on a trick SX track, so he may be a little biased.

The track had 6 lanes and they set it up so that the amateurs would ride on the west side of it throughout the day and the Pro riders would then ride that plus a more technical (big) portion of the track on the east side.

The track was made from a clay base with one sand section thrown in to keep things interesting. As in AMA Supercross, the riders probably didn’t love it but we loved it for shooting photos!

The track did start breaking down and there were some square edges that developed that kept riders on their toes. I joked with #2 Marshal Weltin that it was like Carlsbad in 1982. I don’t think he could appreciate the reference as he added that it was like Elsinore on a Wednesday. Fair enough, I’m old.

You could see that many of our riders just haven’t had the opportunity to ride a SX track much. Riders who came up through the Future West Moto Arenacross Championships out in Chilliwack, BC definitely had an advantage.

There was a 6-whoop section out of a corner that led riders to a triple that sent them higher than most had likely ever been before. Many riders were forced to turn it into a double/single when the whoops put them sideways.

Riders who excelled in the whoops during qualifying were displeased to see that they were cutting them down for the night program. In hindsight, it surely made for better racing with a little more parody throughout the field.

The amateur section proved to be tricky at the higher speed of the Pro riders and there were a couple different ways to get through the two rhythms sections.

Let’s have a look at the two Pro classes.

The 250 class saw many riders who had little-to-no Supercross experience. If you’ve ever tried to ride one, it can be a very daunting experience as you get used to the peaked-out jumps that seem to send you to the moon.

Here are the results:

#46 Marco Cannella just took his first-ever Pro race overall after trading wins with #22 Tyler Gibbs. Marco came into the 2021 season as maybe the odds-on favourite to win. However, he wasn’t able to make it happen and winning the SX portion of this series would really help turn his (and team owner Kevin Tyler‘s) season around.

The team has lost both 450 riders, #3 Shawn Maffenbeier to a knee and #10 Keylan Meston to some sort of energy/focus-draining problem that he is still trying to get to the bottom of.

Marco went 2-1 to Tyler’s 1-2 for a tie in points but put the MX101 FXR Yamaha rider on the top step ahead of the PRMX Wossner GasGas rider from BC.

Gibbs won Main #1 from wire to wire with #25 Guillaume St Cyr up in 2nd place for most of the race. Guillaume got loose in the far amateur section early in the race and ended up actually skimming the rhythm section like Cooper Webb did a couple years ago in AMA Supercross. My jaw was dropped and I didn’t point my camera.

#157 Darien Sanayei looked like a different rider in the two Mains. He finished 8-3 for 4th overall but will be a rider to watch as we move forward.

#30 Jake Piccolo was up in the mix in both Mains but, like a few others, will have to limit the mistakes if he wants to chase this title.

#84 Tanner Ward looked really good but found himself on the ground. He’s one of the riders that could snag a win before we’re finished.

#19 Quinn Amyotte got put in the B practice and qualifier and stood out. He was a rider we were impressed with, as he looks to keep improving quickly.

#50 Julien Benek was easily the fastest rider in the whoops and his dad, Oliver Benek, was definitely not happy when they cut them down for the Mains. Julien will need a good start to go with the leaders.

#28 Sam Gaynor was a consistent 9-9 for 9th but I’m sure he’s not happy with that. I didn’t see him hit the ground but let’s see if he can grab a start and run the pace of the podium riders.

#18 Ryder McNabb found himself on the ground hard in the whoops in Main #1. He also went down again in the 2nd Main, hurting his chances at redemption. He’s young and you can see he’s not as comfortable in SX as he is in MX. Let’s see if he can regroup and get the track figured out today.

#212 Sebastien Racine wasn’t even sure if he was going to race SX this season. He also lacks experience in SX but they left his Intermediate plates on and decided to ride it and gain some. He had some troubles but I doubt it will take long for him to start excelling.

#39 Daniel Elmore looked pretty solid but then crashed and found himself stuck under his bike waving for help. Let’s see if he can improve on his 10-12 for 12th today.

What can we saw other than I don’t think anyone has anything for defending SX champ, #1 Cole Thompson. He’s just so good at this type of racing that it made me ask him, again, if we could ever see him racing 450 SX sown south. He said that ship has sailed.

Try as everyone might, nobody has the pace to run with Cole.

#2 Marshal Weltin said he was riding a little timid. He’s the rider who we’ll have to lean on to make this any kind of race for this title. It won’t be easy, but you know he won’t stop trying.

It was great to see #32 Casey Keast land on the podium. He’s from BC and has a ton of experience on indoor-style tracks. He should be the rider continuing to fight for 3rd spot on the podium, moving forward.

#11 Davey Fraser just keeps going and going. A race date snafu saw Davey alone in his pit but that didn’t stop him from banging bars with some of the youngsters. 5-5 is a good performance for Davey, I’d say.

I didn’t see the actual crash, but this was the end result of #9 Dylan Wright‘s crash in a rhythm section. He looked to have everyone else covered but Thompson, but we were all looking forward to seeing if he could show #1 a wheel and make this a good battle. He went to get checked out last night and his dad told me, “He’s OK.” Hopefully, he’s good and we see him back on the track soon.

I shouldn’t jump the gun but I’m seeing #38 Yanick Boucher as a likely candidate for our Most Improved Award for SX. He’s starting to look more and more comfortable out there. His 8-6 leaves him some room for improvement.

#33 Tommy Dallaire was a consistent 7-7 out there on Friday. He’s going to have company in that place today, I’ll bet, so it will be fun to keep an eye on some of these battles.

#26 Ryan Derry won our Most Improved Award last SX season. He looked smooth out there but his back has been sore and he’s really struggling right now. If he can make it through today, he should be better next week.

#192 Ethan Ouellette finished 11-10 for 11th overall. Watch for him to keep getting more and more comfortable on the 450 out there.

We’re back at it today. See you at the races… 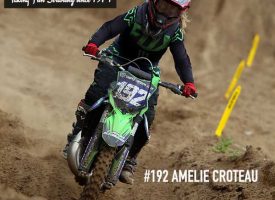 Out of the Blue | Amelie Croteau | Presented by Schrader’s

INSIDE THE FENCE – Team Canada MX at the 2010 MXON 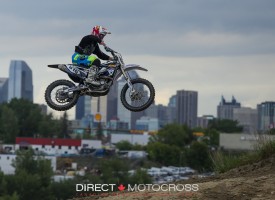