Round 11 went off this past Saturday. In what looked to be a fairly easy track, actually turned out to be pretty tricky. The laps were very short and I think they could have used more of the floor. The track had a whoop section that had to be 100 yards long and it gave most riders fits all day and night. Even with all of the injuries, the class is still pretty stacked and there is good racing all of the way through the pack. #1 Ryan Dungey rode like Dungey and claimed the victory, but he was docked 2 positions for jumping on a red cross flag. I enjoyed the action for all 20 laps, so let’s take a look at the results and see my thoughts.

1st Jason Anderson: Jason is a good sport. Here is what he said on Instagram after the race, “the official results say I won….but I didn’t haha. Hopefully I can battle for a win straight up in the remaining rounds!” I love the attitude, and I thought he had a really great ride in Detroit. He rode aggressive, as always, and continues to impress. And hey, Jason, I’m pretty sure the bonus cheques get cut from the official results, so that’s something to smile about.

2nd Marvin Musquin: Marvin has been making a few minor mistakes, but his fitness and confidence are so good, it’s not really hurting him too bad. He has established himself as a podium guy, and a guy that will challenge Dungey. Once he eliminates the minor mistakes, he will get that win.

3rd Ryan Dungey: Ryan rode a very solid race and took advantage of a Musquin mistake. Unfortunately, he was docked 2 positions for jumping on a red cross flag. Rules are rules and he was docked. Not a big deal when you have a points lead like he does. I really don’t think it will affect him at all. He’s just too strong all the way around, especially mentally.

4th Chad Reed: You have got to think that Chad Reed was loving the big whoops in Detroit. He was skimming them early in the day like it was 2004, 2005. If he can get a start, he can fight for a podium. I think he had a good ride in Detroit, and I think he will podium around Indy.

5th Eli Tomac: This was a very hard packed track and I just don’t think it suited Eli’s style. A 5th is a good ride, but Eli wants to win. He’s going in the right direction and will win another one before Vegas.

6th Ken Roczen: Ken was disappointed in this ride. His start was pretty brutal and it took him forever to start making passes and move forward. This guy should be on the podium fighting for wins every week. He will figure it out soon.

7th Weston Peick: Nice finish for Peick. He needs to build off of this and his semi win and continue to improve.

8th Trey Canard: Trey has got to calm down a little and make better decisions. He tried to push the envelope on #4 Blake Baggett and it just wasn’t there. He was moving forward well, but then after hitting the dirt, he had to do it all over again.

9th Mike Alessi: I feel this was Mike Alessi’s best SX ride. He looked really good and was actually going through the whoops well. Let’s hope Mike can stay healthy for the rest of SX and put in a serious charge for a Canadian Championship this summer.

10th: Justin Bogle: Justin moved forward, but can’t be happy about this ride. He’s a free agent for 2017, and with the huge list of other free agents, he really needs to impress from here on out.

Biggest Stud: I know he didn’t win, but the way Marvin Musquin has stepped up the last few weeks makes him my stud. This guy is a class act on and off the track.

Biggest Dud: Cade Clason was leading the LCQ and had some serious issues. He was sick for most of the week and couldn’t breathe well at all. He was actually throwing up after the semi. It’s just such a bummer to see a guy give everything and not make the main, then see a few guys out in the main coasting around and even skipping the whoop section. This is a premier class, and you can’t skip obstacles that you don’t want to do. MotoConcepts Robbie Feder pointed out on Twitter that one of the riders that skipped the whoops had a broken seat. I kind of get it, but I didn’t hear why the other guy was skipping it.

Biggest Surprise: More flat tires. 2 more racers had to pull in for tire swaps due to flats. This was the rockiest SX track I’ve seen, even worse than Toronto in the early years.

Thanks for reading. See you after the break. 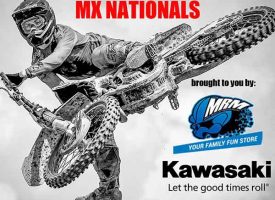 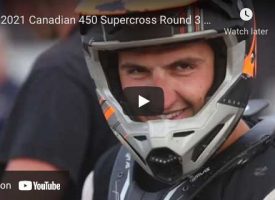 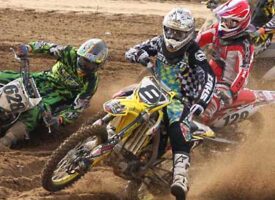