How did you get started in racing?
I was up riding the trails in my local riding area when I met someone they call “The Crazy Hippy.” This guy was amazingly skilled on a bike and I immediately looked up to him for his abilities.  We became friends and he started teaching me to rider faster and better.  Hippy actually opened my eyes to things that I though would never be possible to do on a bike: rock faces, suspended logs, impossibly steep hills…it was really good for me.  He introduced me to my local off-road circuit, the PNWMA (Pacific North West Motorcycle Association), and I’ve been racing ever since.

As a little girl, did you ever expect to be this deep into a sport like off-road?
When I was young, I always dreamed of having a quad (Laughs). When I was sixteen, I decided against getting a quad and purchased my first dirt bike. I definitely wasn’t expecting to be so deep into this sport; I never really had any dirt bike role models as a kid. I’m sure glad I found my calling, regardless!

Do you think off-road racing is harder for a female to compete in?
I think things can be a little tougher being so much smaller than my competition when I’m racing in the men’s class.  Sometimes, off-road racing really does require quite a bit of strength, especially if you get stuck.  Being able to put a foot down on a tough hill or technical section would definitely help as well.  Honestly though, I think that if you have the drive, you can do anything.  I think more women need to put themselves out there and go for it.  We really can do anything we set our minds to!

“Winning the Desert 100 in Odessa, WA was a huge accomplishment for me. I was so proud to say I took first place in the women’s class and also first overall on the second wave.” – Hillary Patterson Photography image supplied by Griffiths

Who is your favourite rider and why?
That’s a tough question.  There are so many riders that I look up to.  I guess if I had to choose I would say Chris Birch and Graham Jarvis because I can’t choose between the two.  These guys are amazing riders. They both have an incredible amount of bike control and skills.  One day, I hope to be at their level.

Is there one lady racer out there that you think has paved the way for other girls to be successful in the sport?
Yes, I think Victoria Hett is a great role model for the lady riders and racers out there.  She is an incredibly fast and skilled rider. I look up to her for her skills, her knowledge, and her awesome attitude.

What Canadian Pro do you look up to and why?
I would have to say Malcolm Hett because he works so hard and has overcome so many hurdles.  He always comes back from an injury better than before.  Malcolm is so dedicated to the sport, whether he’s racing, building and maintaining trails, or pitting for fellow riders because he’s injured. He’s passionate about the sport really shows.

What is your favourite race and why?
My favourite race would have to be the Desert 100 in Odessa, WA.  It is nothing like the cross country races I normally do.  The terrain is fast and open but it is probably one of the scariest races I enter. There’s just something about lining up next to a thousand other racers on a mile long starting line that gets the nerves going!

Who is your hero?
My hero is Graham Jarvis for being the top off-road racer in the world for so long and for kicking butt even though some of his competition is half his age! I absolutely love his slow, twelve o’clock wheelies.

What is your favourite part about going to the races?
My favourite part about going to the races is spending time with all the great people I race with.  Everyone involved in our off-road circuit is so positive, stoked, and passionate about the sport.  It is like one big family out there.  Of course, I also love the adrenaline rush I get when the gun goes off and that feeling of accomplishment I get after finishing a gnarly 3-hour endurance race.  There’s no better feeling!

Like everyone we speak with, Megan’s favourite thing about going to the races is being around all the great people. – Griffiths photo

What do you like to do when you aren’t racing?
When I’m not racing, I’m usually busy filming for and editing videos for my YouTube channel.  I have a web series that I use to promote off-road racing and riding as well as give people an inside look on what it’s all about to be an enduro rider.  I also make video tutorials to help people better their riding skills and hopefully provide some entertainment!  Here is the link to my channel if you want to check it out!
https://www.youtube.com/channel/UCugPFDyYCzY9Qs79NevYdMw

Is it important to have an off-road racer as a boyfriend/partner, or just a bonus?
I would have to say it is a bonus to have a boyfriend that also rides.  It is great to be able to ride and race together but I don’t think it is a must.  As long as he’d be okay with me spending 90 percent of my time on the bike (Laughs).

Be sure to check out Megan’s YouTube page. – Hunted Photos image supplied by Griffiths

If you ever have children, will they be off-road racers?
Yes, definitely!  That is, if I ever decide to slow down for more than a few minutes and have children. I will have them on bikes as soon as possible!

Who do you want to thank?
I would like to thank my friends and family for being so supportive.  My dirt biking career is finally starting to take off because of all their support.  I would also like the thank my wonderful sponsors: Valley Moto Sport in West Kelowna, Gibson Tyres Canada, FXR Racing, Limenine Graphics, GP Moto in Kamloops, Novik Gloves, EKS Goggles, Built To Ride, Emperor Racing, and KTM Canada. 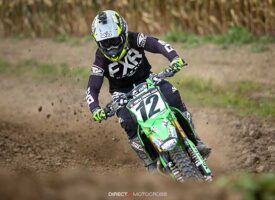 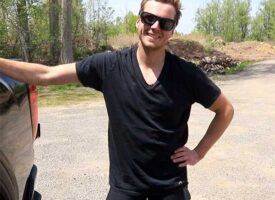 Video | Where Are They Now? | Josh Long | KTM Canada 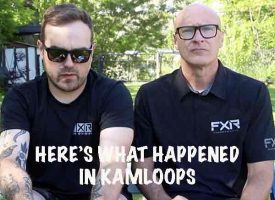