Welcome to Week #22 of the DMX Frid’Eh Update this week brought to you by TLD Canada. We’re about to head into the first round of the Canadian Triple Crown Series MX Nationals at Whispering Pines outside of Kamloops, BC.

It’s Week #22 and that means Tyler Gibbs is the rider we are to spotlight. Tyler is out at the track this week with his younger brother Travis Gibbs. With some people struggling to get service, we’ll wait until we get back out to the track to do an interview with the rider from Mission, BC.

Tyler should be one of the riders hoping to give #4 Jake Piccolo, #64 Ryder McNabb, and #46 Marco Cannella fits up at the front of the 250 pack this season.

The WCAN started dropping gates yesterday and the racing was intense. We’ve got some top-level riders in both the amateur and pro ranks participating.

You can follow along with the live timing and check out results HERE.

Check out the names in this Pro Am field:

What can we take from these results? The fast guys are still fast and everyone else is going to be chasing them again in 2022.

#22 Tyler Gibbs was up in the top 3 until the final lap when he dropped to the back of the pack but still put in the fastest last lap of the race.

#3 Shawn Maffenbeier is always fast at this track so it shouldn’t be any surprise that he got out front off the start on his 450 and held it to the flag.

#4 Jake Piccolo spent the winter at Club MX and is looking to defend his 250 title. He kept the gap to Maff at around 5-8 second throughout the 8-lap moto on his 250.

#84 Tanner Ward was 3rd but 30 seconds behind the lead two on his 450. It will be interesting to see how he adapts to the big bike in a full gate of them.

We got a message saying that #195 Blake Ashley, who we met this week during practice, has parted ways with Al Dyck‘s MVP Racing team. I spoke with Al about the situation and he said that Blake just thinks he can do better on his own and will either race our series on his own with other support or head south and hit the Lucas Oil Pro Motocross Championships. MVP moves forward with their other 250 rider #510 Marcus Deausy.

It was good to get our first look at Steve Simms‘ Sam Gaynor replacement 450 rider, #177 Christopher Blackmer from Michigan. He was in a good battle with #18 Parker Eales so that will hopefully carry over to the racing on Sunday to give Parker some company out there.

#197 Brock Leitner is back and looking pretty solid out there. He battled up near the front early and eded up 5th with Blackmer on his rear wheel. He will race the first round at least and take it from there.

#50 Julien Benek is back after his leg injury suffered at the Daytona Supercross. He will likely take a round or two to get himself back in full race shape but he moved up through the field to take 4th and close in on Ward. Team owner Julien Perrier has got to be happy about his progress.

Speaking of Julien, he will have Mexican champ Felix Lopez on the 450 in place of Justin Rodbell who won’t be crossing the border to race in Canada after all. Felix finished 18-16 for 16th at AMA round 1 at Fox Raceway last weekend so watch for him to be mixing it up in the top 3-5 all summer long.

#14 Quinn Amyotte started out 11th and worked his way up to 8th with consistent lap times. It will be good to see him solve the mechanical gremlins that hampered his results last summer and stay up in the top 5 in the 250 class if he can.

It was a pretty impressive ride by #66 Tyler Yates in 11th ahead of #13 Daniel Elmore and #34 Wyatt Kerr. Tyler moved his way up from 15th ahead of some pretty fast riders.

Greg Poisson and I are heading out to the track as soon as my sister gets here. She’s been away for a well-deserved vacation and I’ve taken over the past 3 weeks looking after my mom who has advanced dementia, but that’s a story for another day.

Anyway, we’ll see everyone at the track soon…

#170 Keylan Meston from Calgary, Alberta, will again line up south of the border to race Round 2 of the AMA MX Nationals at Hangtown in Sacramento, California.

Last week, he raced at Fox Raceway and finished 31-26 for 28th overall in the 450 class. His first moto was going pretty well and he was working his way forward, but a couple tip-overs hampered his finish position.

Watch for him to string together a couple good motos tomorrow. It would be cool to see him score a point or two.

After this weekend, he’ll head home and get ready to race Round 2 in Drumheller, Alberta.

#09 Annalyse Lopushinski has won the first Ladies moto at the WCAN ahead of #3 Malia Garant and #1 Eve Brodeur! Eve was running the fastest lap times but she didn’t get out front off the start and had one bad lap that left her in 3rd. This should be a good class to keep an eye on.

Have a great weekend, everyone. At this point, the forecast for Sunday isn’t looking good, unless you hate dust.

Out of the Blue: Natalie Bruno

Out of the Blue |Tamara Jurkiewicz | Presented by Schrader’s 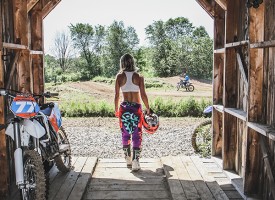 Out of the Blue: Nelly Dufour 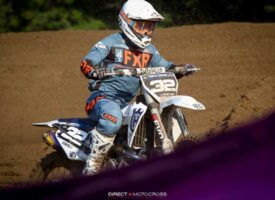