Week #13. Ooooohh. But you know who doesn’t care about the #13? Jeremy McKie, that’s who. I wonder if he lives on the 14th floor of an apartment, too? Welcome to Week #13 that falls on a Friday and is Good Friday, to boot. There’s a lot going on there.

As I sit here typing this, Ontario is about to go on lockdown again for a month. With this news, some riding facilities in certain areas are being forced to cancel their Opening Day festivities.

For example, the iconic track up in Chatsworth, ON – Motopark – was all set to open up this weekend and unveil a few new things they have going on up there that are really forward-thinking. Unfortunately, they have cancelled their plans for the weekend and will remain closed until things lighten up again.

Here’s the PR that went out:

Motopark Closed this Weekend Due to COVID-19 Shutdown

I’d like to thank all of our staff who have put in an amazing amount of work getting Motopark ready to open this year. We have made a number of improvements at the park this year and look forward to the day we can have everyone enjoy the facility.

Unfortunately, due to the announcement today of a COVID-19 lockdown in Ontario, we won’t be opening this weekend as originally planned. Stay tuned to our Facebook page for news on when we can open safely for all our members.

If you are planning to ride somewhere this weekend, be sure to contact them and make sure they are able to stay open this weekend before you load up and make the drive.

Jeremy McKie has decided he’s not going to run from the #13. Over the years, most riders have skipped the digit and gone with #14. It was always an option for riders. Looking back, it’s pretty weird that we are still worried about something like this, but motocross racers can be some of the most superstitious people on the planet, so I guess it makes sense.

Jeremy was a rookie Pro last season and jumped from #41 to #13. That’s a big improvement, for sure.

He spent some time down south this winter and raced the James Stewart Spring Championship at Freestone MX in Texas, too. We grabbed him for a conversation this week to find out what he’s been up to and what his plans are for the future:

Direct Motocross: Hello, Jeremy. We haven’t seen you in a while, but I know that you have been busy. We’ll get to that in a minute, but let’s turn our attention back to the 2020 season. You got your first Pro podium in the mudder at Walton Raceway but they weren’t able to do a moto podium or interviews. Was that a big bummer from your perspective?

Jeremy McKie: Obviously, wasn’t happy to not have any podium interview, even if it was a mudder. I crashed twice in that moto and still managed to finish 3. At the end of the day, wasn’t that much of a big deal, I knew I had 3rd and that’s what really counted for me.

How did that feel to cross the line on that day? That must have been one of the toughest races ever, no?

Honestly, it was a weird day for me. After the first moto I was super-pumped, and the track wasn’t that bad in the first half of moto 1. Then second moto came around and barely made it in time for staging and then the moto was just awful. I crashed like 2-3 times and just wasn’t riding well which cost me the overall podium spot.

How did the rest of your MX season go? You ended up 7th overall. Were you happy with your riding and finishes?

I wasn’t happy at all. I was 6th overall before the two Sand Del Lee rounds and only 1 point behind 5th. Those two rounds were awful for me and really was disappointed in myself. I know I didn’t finish were I belong.

And then you were 4th in SX with a tight points battle with Tyler Gibbs. Were you happy with the series?

The series was all right. The track wasn’t too hard which I think really made everyone look closer than it should have been. I had good speed, just some bad luck. I could have podiumed on the last weekend with the speed I had. We learn and move on.

What did you get up to when the season ended last summer?

I started to work for my dad, so I could make money and go to the states as soon as I had enough and I was lucky enough to get to ride a couples times in the late November and train every day with my trainer (Jonathan Mascola) until I left to MTF.

Hey, I guess we should also talk about the fact that you’re going to run the big #13. Did you jump at the chance or did you consider doing the old #14 trick?

I was pumped. Honestly, didn’t consider at all to change it. I’ll run it and make it look good for sure!

You did some racing down south over the winter. Where did you race and how did it go for you?

Only race I did was Freestone but it was awful. I wasn’t riding good or anything. I just looked like I was doing a bunch of “side laps” out there.

And what will you do between now and the first round of the Canadian Triple Crown Series?

I’m at MTF since February now and I will only be back home May 1st, and definitely will come back for the whole winter next year. As soon as I’m home, I will just continue to put in the work and be ready to show people what I’m made of!

How are things going over at your SMX track? What’s the plan there for this spring and summer?

Tracks just opened last week and it looks fantastic. It’s the first time that I’m not the first one to ride it but definitely can’t wait to go ride it once I’m back.

Plan’s is to continue all the work and effort I’m putting here at MTF to the track once I’m back. We have summer camps for riders at SMX, which I’m looking forward to train with fast riders, like Tim Tremblay, Jess Pettis when he comes to Québec, the DaSilva brothers, Thomas Rendall, and plenty others!

Who will you be riding for and with this summer?

I’ve actually got no call or email from any teams last fall which is frustrating but I will continue to be on my own this year. I have great sponsors behind me this year like Fox, Oakley, Dirt Care, Top Class Rentals, SMX and a bunch mores who really believe in me and help me a lot.

What kind of music do you listen to, anyway?

I just listen to whatever playlist my friends make. I’m not a big music fan.

And, last thing, I need something new to watch on Netflix or Prime. Do you have any suggestions?

Well, thank you for chatting with us and good luck. Who would you like to thank?

OK, the fact that he likes Cobra Kai is interesting to me. He’s obviously too young to have watched The Karate Kid when he was a teenager, like I was. I was absolutely hooked on Cobra Kai from the moment the first scene started. It’s actually terrible, but it’s so terrible that it’s amazing! I guess I’m just surprised someone as young as Jeremy finds it good because they don’t have the same history with it as us old farts.

Ok, with the threat of a lengthy lockdown looming, I think I’ll head out right now and check out the local tracks in the London area and see who’s taking advantage of this sunshine. It’s only going to be 3 degrees Celsius today, but there will likely be people out riding. BRB…

Well, I just spent the better part of the afternoon checking out a couple tracks that sit just east of London – Gore Road and The Pit. There wasn’t much action going on today over at Gore Road, which is owned by a former fast guy named Steve Luyks. It was only 4C today, so most people are likely waiting for the 20C predicted for the rest of the weekend.

It’s fun for me to chat with Steve because he is a rider who I always remember from the Hully Gully days and races around the Ontario region of the CMA. He was always a couple classes ahead of me, so I had the chance to watch his races in the more advanced classes as I made my way up.

I shot the breeze with him for a few minutes and then headed over to another track that is less than 15 minutes away, The Pit, just outside Thamesford.

I don’t know why Dario Zecca was so surprised to see me – I’m the one who only lives a few minutes away in London. He’s the one who is all the way down from the Parry Sound area!

He and #313 Nick Burnside were down from north of Barrie to find open tracks. There’s still some snow on the ground in areas up there and tracks are still waiting to open up.

They were both looking good and Dario and I spent most of the time talking about whether or not he should try the big, downhill triple jump that covers about 150 feet (I counted out 50 steps). I even went so far as to text someone who I know has ridden there a lot. Jamie Ruddock told us that he’s only seen two people do it while he was there in all the years he’s been going, Ryan McFarlan and another rider he didn’t know. It’s big and there was a pretty strong crosswind.

Anyway, Dario didn’t end up doing it, but said that he’s pretty sure he would if there was a rider there who did it in front of him. I think he’s still there waiting.

So, now it’s 4pm and we’ll end this week’s Update there. It’s Good Friday so I didn’t really want to bother people at the start of this long weekend.

Have a great weekend, everyone, and we’ll be back to some Supercross next week. 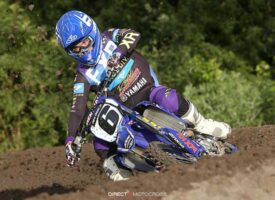 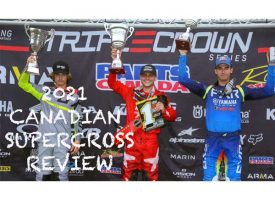